The Last Pro Tour on the Boat

Pro players love the Queen Mary. Though it may be in disrepair, it is a wellspring of Pro Tour memories. It is the only event held at the same location each year, and as such has developed a culture of its own.

Money drafts line its halls until all hours of the night. It has blessed and cursed some of the game's best. This year will be the last aboard The Boat, and the tradition ended with a bang.

Many players feel that playing four rounds with your first draft deck doesn't give one a chance to accurately demonstrate their skill. Put bluntly, the first draft is said to be "More Random," and you might end up with a horrible deck for no reason at all. To address this issue, the DCI decided to reverse the lengths of the drafts: three rounds with your first draft deck, four with your second. This led to a pairing nightmare that prevented the last round from starting until after eleven o'clock at night. Four re-pairs weren't enough. Players grumbled, but most don't sleep anyway, and so were able to meet the challenge of the late hour.

The Lone Star State exerted its dominance on the first day. One apartment's worth of drafters went 19-2, and excepting Fletcher Peatross' 0-4 slow motion car wreck, the place where everything's bigger sent all its competitors into Day 2. Though their many unorthodox draft strategies proved less effective, David Williams and Adrian Sayers finished in the top thirty-two.

Half the Tournament Makes Day Two

Los Angeles was the first Pro Tour to implement the DCI's new "Everyone Tied for 96th Gets to Play More" Policy. Though 4-2-1 was the standard for Tours past, the new system encouraged players to play out their last round. There were many success stories about those who would have been eliminated but finished in the money, but none as amazing as Your Move Games' Junior Varsity Member Danny Mandel. 127th after seven rounds, he ended the tournament in twelfth place, pocketing $4,400. 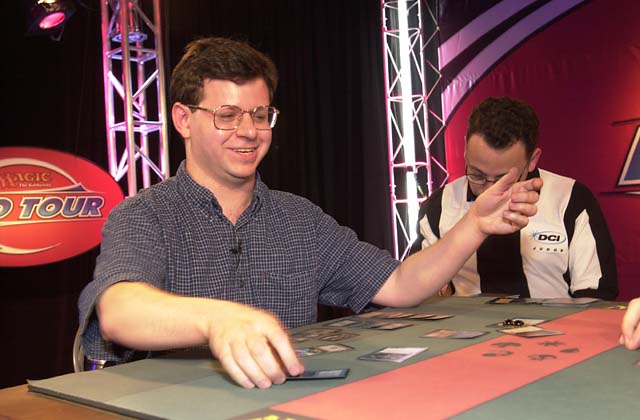 Many players profess to be Limited Specialists. Some are known to be masters of constructed, but couldn't draft their way out of a wet paper sack. Three players dispelled the idea that Magic is a game composed of two camps by reaching Top 8 in back-to-back Pro Tours: Mike Pustilnik, Jon Finkel and Kamiel Cornelissen. Finkel's consistency is well-known. Mike and Kamiel make worthy rivals for him.

"I think they're finished scraping Finkel off the table." -- Randy Buehler

The Myth of Finkel has reached epic proportions. While his continued success is a credit to his abilities, the man is simply not a god. This sentiment seemed prevalent, evidenced by onlookers joy at the bludgeoning he received at the hands of Kamiel Cornelisson in the semifinals. Cornelisson won game one despite Finkel's having the Pyre Zombie that many considered the silver bullet that could beat him. The rain of elbows continued in game two, where Finkel took beats so bad he accidentally released a techno record. Game Three was the most vicious yet. Kamiel had a Crimson Acolyte protecting a Cloaked Serpentine Kavu while Jon busied himself with Phyrexian Slayer and worse. It was so savage they had to cut the cameras in mid-broadcast.

Rith may have ruled Chicago, but he met an ignoble end in the knock-down drag-out finals of Pro Tour Los Angeles. It seemed like Cornelissen was ahead in game five, but Pustilnik rallied in an amazing series of turns, culminating a lowly Ravenous Rat sending the Finkel-killer to Cornelissen's graveyard. Pustilnik went on to win the whole show, and the boat filled with wild cheering from the huge crowd of spectators.

To the Manor Born 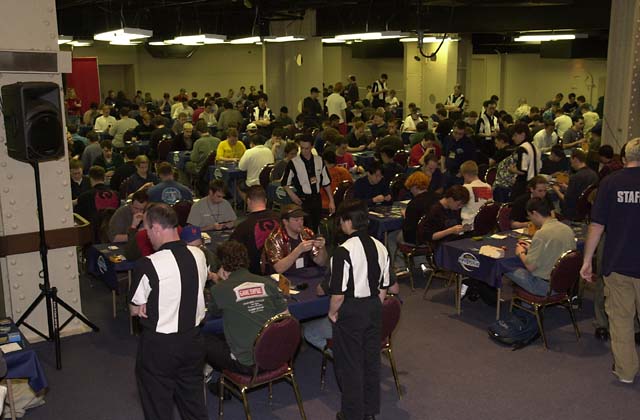 Kamiel Cornelissen isn't well known on the Tour, but he will be soon. A professional player for only a year and a half, the Dutchman has competed in only three singles Pro Tours, and his finishes go: Eleventh, Second, Second. Soft-spoken and unassuming, he is easy to pass over in favor of some of the game's more flamboyant players. However, two finals in four months have a way of putting one on the map.

Couldn't have happened to a nicer guy.

It's hard to imagine a better end for the last Pro Tour to be held aboard the Boat. Cornelissen and Pustilnik are both extremely consistent players without a major title to their name. They're also consummate sportsmen: Courteous, friendly and humble. Pustilnik was a favorite in the matchup, and had the support and well-wishes of many of the competitors. Though Mikey P's friends wanted him to win no matter what, even his die-hard fans were quick to describe Cornelisson's skill and character. Seeing Pustilnik's excellent Top 8 play and giddiness over his win, one could see he's earned the respect given to him by so many. Now he has the credentials to prove it.

"Many people want [Kenichi] to win. A lot of Japanese players can't afford to come here, so they like us to do well." - Satoshi Nakamura 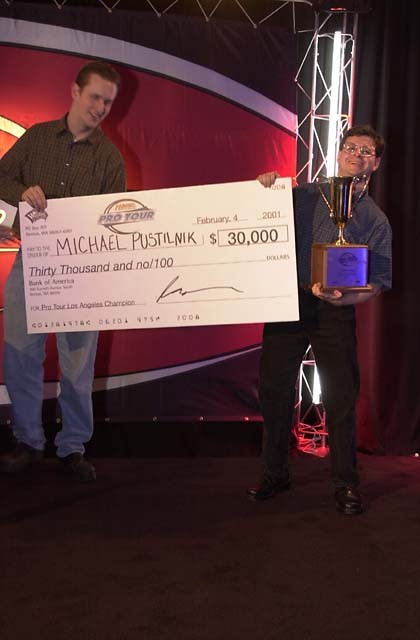 Japan was well represented on Day Two. Kenichi Fujita was one match win away from a Top Eight berth, against Pro Tour perennial Satoshi Nakamura. The two are longtime friends and it was unfortunate that they had to square off. Satoshi won, and his eleventh place finish is the highest posted by any player from Asia. If not for a rules oversight in his Round 4 match against Scott Johns, the Top Eight would have been his.