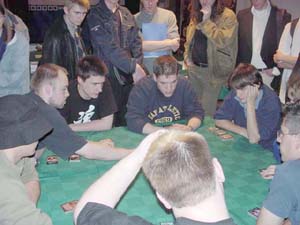 Kai was seated at the second pod for the final draft of the Swiss with his 9-2 record, and he was in a position between two very well-known players. The table was as follows from seat one Amiel Tenenbaum, Daniel Eriksson, Frederik Courtois, Jens Thoren, Mikael Polgary, Daniel Struik, Jelger Wiegersma and Kai Budde, so Kai was between Jelger and Amiel.

Kai's draft started off unsteadily as he only managed to pick up a Goblin Sledder and a Sandskin from the first pack, then a Secluded Steppe, an Imagecrafter, and a Wave of Indifference. Meanwhile it became clear that Amiel to his left was Red-Green and Jelger was Green-Black. Since he was unsure whether he was going to be able to get much red on the way back, Kai made his next few picks White taking Inspirit, Battlefield Medic, and Daru Lancer. At that point Polgary's deck was looking like the strongest on the table.

In pack seven Jelger ripped Exalted Angel and Kai patted him on the back with a smile as it seemed certain it was going into his deck. For fun, Jelger shook his head sadly and moved to take it, but it was only a bluff as he took Treespring Lorian and Kai got the Angel.

At the end of the first set of packs Kai was definitely white but wasn't necessarily in a second color although it seemed likely to be red. Opening the first pack in the second set of boosters gave Kai a Sparksmith cementing him in red. There was a light moment in the next pack as a Voidmage Prodigy was opened up. Amiel Tenenbaum struck the pose of Kai in the picture and received a light punch for his efforts. In the second set of packs Kai picked up Daru Lancer, Gustcloak Harrier, Battering Craghorn, Daunting Defender, Shock, a second Lancer, and a Goblin Machinist.

This meant that Kai was definitely playing Red-White. He missed out on a Rorix, Bloodwing which went on the other side of the table, and he added Chain of Plasma, Glory Seeker, Skirk Commando, Piety Charm, Daru Healer, Skittish Valesk, Lightning Rift, Pinpoint Avalanche and yet another Daru Lancer to his deck in the third set of packs.

Kai's deck was by no means the strongest on the table, but it certainly has a chance of getting the 2-1 or 2-0-1 he needs to get into the top eight. Jelger's and Amiel's decks seem quite strong as well, but my prediction is that Mikael Polgary will win the table.