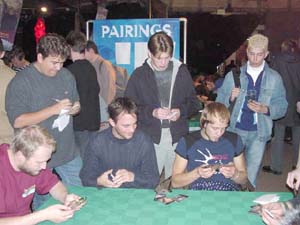 Pro Tour Nice champion Eivind Nitter of Norway and Limited GP specialist Antoine Ruel of France sat down at table 4 for the second draft of GP Copenhagen. They both need a perfect record and some luck to make top 8.

Antoine was in seat 3 and Eivind in seat 4, normally believed to be very good positions in a Rochester draft. It wasn't the case for this draft though as both players ended up with a rather suboptimal deck.

When they sat down they gave each other a big high five, indicating they were going to cooperate nicely. They did just that as Antoine's first pick was a Daru Lancer and Eivind's was a Severed Legion.

The two players feeding them had a green and a white card at this point so Eivind was looking good as the black player. He started to take some green creatures to complement his black removal and everything seemed fine. Over the course of the first round of packs things changed dramatically though as both players feeding Antoine and Eivind moved into black. Eivind was fairly committed at this point and couldn't abandon black nor green for another color.

In the meanwhile Antoine's WR deck was coming together just fine as the players around him fought for black and green cards. He picked up a lot of solid burn in a couple of Pinpoint Avalanches and Solar Blasts but he was lacking in the creature department. The same was true for Nitter as he couldn't get his hands on any fat due to his horrible position.

When Antoine was forced to first pick a cycling land, the disaster was complete. Not opening any good cards and not getting any late either both players will have a hard time getting 23 cards for their deck, let alone win out.

They should be able to get a 2-1 record from their decks though, as the other players on the table seemed fairly unexperienced, often drafting the wrong card. A Silklash Spider that got to Eivind as a 6th pick is a perfect example.

The favorite to run the table has to be one of the two Germans. Rene Appel was the only blue mage at the table and got rewarded with 7th pick Clones and 8th pick Ascending Avens, while Roland Bode got a very good White/Red deck featuring Lightning Rift and a lot of good burn and damage prevention spells.