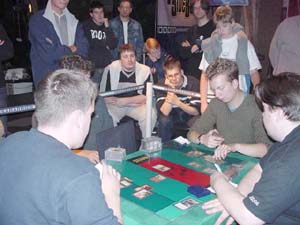 Kai is looking to win his 127th event tonight after crushing Jens Thoren in the semifinals. Another Jens is trying to prevent him from adding another title to his name; Jens Krause seems on a pretty hot streak lately, top 3ing GP Hamburg two weeks ago. It's an interesting matchup pitting Kai's small fliers and little ground creatures against Jens' bigger but slower fat creatures. Kai seems to have a small advantage going in but it can go either way.

Jens decided to go first and kept his hand after a little pause. He cycled a Barkhide Mauler on turn 2 signalling a bad or land light draw. He played his third forest on turn 3, still looking for his second color, black. He still managed to cast an Everglade Courier that was answered by a morph guy from Kai.

A Birchlore Rangers showed up to fix Jens's mana but he didn't have a fourth land so he just said go for the moment. When he blocked Kai's morph guy it turned out to be a Daru Lancer. This is one of the strengths of Kai's deck. He has a lot of totally different morph creatures making blocking very hard for his opponent.

Jens was still looking for his second color but he had access to 6 mana by now so he could at least cast some green fatties to stop Kai's Lancer from dealing too much damage. When he passed the turn without casting anything Kai knew something was up. He atacked anyway and got his Lancer killed by a Cruel Revival. 6 Forests and an Elf later, Jens played a Krosan Groundshaker all but locking up the ground. It didn't stop Kai's two Gustcloak Harriers though. The game turned into a race, Kai's two Gustcloak Hariers against the Groundshaker. When Jens added a Krosan Tusker to the fray though, things weren't looking too good for Kai. 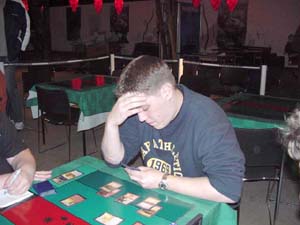 Jens attacked next turn and when Kai declared his blockers, he cast a Tribal Unity for 4 and gave his blocked Beast trample to deal about 129253174 damage to Kai. That was game.

Kai kicked off Game 2 and debated playing a cycling land turn 1, he didn't though as he opted to cycle it away on turn 1. His land drops were just fine after that and he didn't really seem screwed. An Erratic Explosion killed a Wirewood Elf before Jens could get to 5 or 6 mana to start dropping fatties.

Jens debated blocking Kai's morph creature for a full two minutes after deciding to let it through. Ofcourse it was a Skirk Commando taking out Jens's newly morphed Spitting Gourna, one of Jens' only solutions to Kai's fliers. An Aven Soulgazer further increased the pressure on Jens to find some fatties and race. He found some help in a couple of Elves as he played a Symbiotic Elf and a Everglade Courier. A Wirewood Savage threatened to get out of hand real quick too as Jens played a Symbiotic Beast to draw the first of what would be many a card. The card advantage continued as Jens took out Kai's Skirk Commando with a cycled Primal Boost. Kai really needed some fliers fast to prevent Jens from overpowering him with card advantage and bigger creatures. 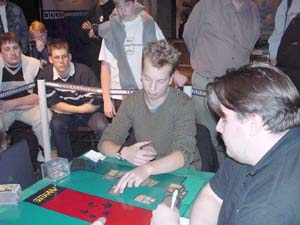 A Pacifism on the Symbiotic Beast helped a little but a Krosan Tusker came down next to replace the Pacified monster. Another Pacifism took that down too and Kai's Soulgazer looked like it might actually kill Jens on it's own. With three more attacks to go Jens considered his options carefully and decided to add yet another Beast to the board in a Barkhide Mauller. It was unable to block fliers though so Kai's Soulgazer was still looking good. Cruel Revival took it out when Jens was on 6 and Kai's whole game plan crumbled to dust right there. Jens' creatures outnumbering his about 3 to 1 Kai had to find an answer to the Monsters real quick.Go didn't seem that exciting. Next turn, what little chance Kai still had was ruined by a Tribal Unity for 6 turning all of Jens' Elves into superelves eliminating Kai's entire blocking team.

It was only a matter of time before Kai succumbed to the gigantic fatties and Jens Krause advanced to the finals to take on Bob Maher and his incredible Red/Green deck.