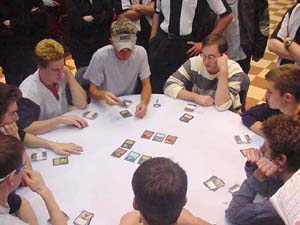 The Top 8 Of Grand Prix Philly sat down to sort out some unopened packs, and grab some cash if they could. Sitting at the table was Pro Jeff Cunningham, for whom this was just another grand prix top 8, sitting on either side of Cunningham were two New Jersey players, both wearing "TOGIT" shirts, and hometown favorites Craig Krempals and Patrick Sullivan. Pittsburg local Nick Eisel, and Virginian Morgan Douglass are opposite each other, Eli Aden, a Knoxville, TN, gamer, Jacob Rabinowitz from Boston and Shawn Doran of Rochester, NY, round out this very young Top 8.

The draft started out with Cunningham, first seeded after the Swiss electing to sit in seat four. I asked Cunningham before the draft what he would try for and he said "I won't draft anything but green/red or green/black." With that in mind, the first pack was opened. Shaw Doran was put into a difficult position being asked to open first, as he wouldn't really be able to safely declare his colors. The pack was laid out and some good cards were on the table, Sparksmith, Serpentine Basilisk and Anurid Murkdiver were probably the best colored cards in the pack. But Doran had a trump card. Riptide Replicator was the rare, and in one pick, Doran effectively negated the disadvantage of picking first, and since the Basilisk was picked by Sullivan, on pick from Cunningham, Cunningham's main draft strategy was shot.

The players shifted who opens and the colors of each deck began to develop. Morgan followed his Sparksmith up with several more red picks. Sullivan continued to take Green cards, including a sixth pick Ravenous Baloth. Cunningham was sticking to black, but trying to make it clear he would fight for green. Krempals went right for blue white, but may be black with a Swat, and Nick Eisel showed tendencies towards a green and red deck. Eli Aden started white and ended up into black as well. Jacob Rabinowitz started taking green and red ingredients and the colored spells in Doran's deck ended up being mostly blue and white, headed by an Exulted Angel opened by Aden.

After the first round of packs the colors came out to... 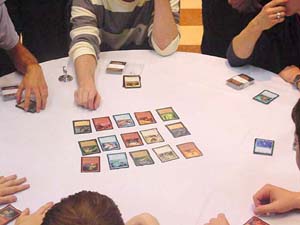 The second round of packs kicked off in the other direction with Jacob Rabinowitz taking the green common powerhouse Wirewood Savage. Wretched Anurid went to Eli Aden and the Menacing Ogre picked Nick Eisel as an owner. Cunningham, a little frustrated that now black was being overdrafted as well as green, decided to try for a Solar Blast. The players were trying to stay focused on building strong decks, and hate drafting was kept to a minimum. That didn't stop Cunningham from looking a little rattled, as players left and right kept jumping on the good black cards, leaving him with the dregs. Aden solidified himself as Red Black, Sullivan stayed true to green white, but was rewarded by pulling an Akroma's Vengeance. Douglas stuck with Black red, picking up his second pinpoint avalanche. Doran picked up some more fliers and a Combat Medic for his Blue White deck, and Krempals nabbed Blatant Thievery and Tribal Golem for his blue white deck, on the opposite side of the table, and these two made up the blue drafters in the top 8.

The drafters settled into archetypes based on their colors and which ever creature type that those colors best support. The Blue white drafters were taking Clerics and Illusions, the black red players were picking up goblins, while the green drafters were taking beasts and the beasts best buddy Wirewood Savage. The red players were just hopping to open up the sets best common, Sparksmith, eventually. Krempals played red for Lavamancer's Skill in his blue white deck, Rabinowitz had multiple Solar Blasts and Skirk Commandos in his solid red green deck, Cunningham ended up with a Sparksmith and a solar blast but chose not to play them in his green black deck, and Morgan Douglas found double Pinpoint avalanche, double Erratic Explosion, and superstar Sparksmith in his tight black red deck. Eisel went bombalicious in the last few packs, slamming down Gigapede and Silvos, Rogue Elemental. Shawn Doran ended up with Triple Pacifism to go along with his Angel and Replicator. 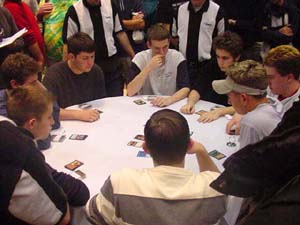 In the end the deck will shape up as follows...

Sullivan in Green and White
Morgan with a smashing Black and Red deck
Doran has a Blue White deck that could be called a "Ting"
Rabinowitz's Red Green deck could smash
Aden's black white deck is super fast
Cunningham is taking Black Green to town
Krempals is gaming with Blue White red
And Eisel has a Beastly Red Green deck.

I'd expect Eisel's aggressive bombs to carry him to the gold.