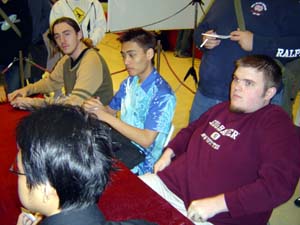 Walls was one of the three high profile pros to clinch top 8 at GP Hong Kong. He hails from Indiana. He and a few friends decided to vacation for a week in the far east between PT Kobe and GP Hong Kong. Gabe's most recent good finish was GP Oakland where he lost to the quarterfinals to Dave Humphreys. GP Oakland was the same format as Hong Kong and Gabe seems to have grasped the format better than most. He tries to force white and black. He loves the cheap creatures both colors have to offer. He is a firm believer that Blinding Beam and Chittering Rats are the best two commons in their respective sets.

Gabe's neighbors in this draft were two teammates from Malaysia. Tan Chuen Hwa was on his right and Terry Soh on his left. Gabe opened his first pack and had a tough decision ahead of him. The pack contained Barter and Blood, Myr Incubator, Leonin Scimitar, and Deconstruct. He thought long and hard for what he calls the black gambit but decided to take the better card in Deconstruct. His 2nd pack was rather weak and the only playable cards where Consume Spirit, Tel-Jilad Chosen, and Goblin Charbelcher. He was kicking himself for not taking that Barter and chose to stick to his first pick and took the Chosen. His third pick was between Vulshok Berserker, Pewter Golem, and Tel-Jilad Exile. I could see him shaking his head in disgust as he took Tel-Jilad Exile. The fourth pack gave him a choice between Leonin Den Guard and Pewter Golem…. He slammed down the Pewter Golem realizing no one near him was black. The next couple of picks net him a Leaden Myr over an Irradiate, Consume Spirit over Hematite Golem, a late Slith Bloodletter, Disciple of the Vault, Nim Shrieker, Tooth of Chiss Goria, and a Viridian Joiner. Gabe was not the only one to realize that black was underdrafted and his neighbor on the right decided to take 9th and 10th pick Irradiates away from Gabe and splash them in his UW deck.

The second pack Gabe took a Vulshok Battlegear over a Leonin Scimitar, a Disciple of the Vault, Skyhunter Cub, and Tajnar Swordsmith. The next pack he thought for a while and took Terror over Relic Bane. He got a nice third pick Mindseye over Serum Tank and Pewter Golem. His fourth Pick gave him Nim Shrieker over Predators Strike, and it seemed as if he was ditching green all together and trying for monoblack. He got 4th Pick Mirror Golem, took a Steel Wall over Clockwork Condor, Myr Retriever over another Clockwork Condor, Vault of Whispers, Nim Lasher, and Omega Myr rounded out the last few picks. Gabe doesn't like Clockwork Condors and his reasoning is because he didn't draft any Moriok Scavengers. After pack two Gabe's deck was looking quite weak and needed a very good third pack for a run at the gold. Darksteel improved black so much, in Amsterdam black was undraftable and many pros went as far as saying that was the first format with only 4 colors to choose from.

The third pack was very unfair for Gabe. His first pick was Essence Drain over Nim Abomination, 2nd pick was a Thunderstaff over a Scavenging Scarab and a Barbed Lightning. Third he took Screams from Within over Arcbound Worker and Pulse of the Fields, 4th he had the choice of Vedalken Engineer, Spire Golem, and Arcbound Worker which he took. 5th was another Vedalken Engineer or Arcbound Stinger which he again took to follow up on his artifact Arcbound theme. Surprisingly, he took a 2nd Screams from Within over an Arcbound Bruiser, and the last two playable he got were Darksteel Citadel and Whispersilk Cloak. He got 0 Grimclaw Bats, 0 Chittering Rats, and 0 Echoing Decay. Needless to say his going into black mid draft didn't pay off. He could have had a better Black-Green deck but he choose synergy over card quality. Gabe was very unfortunate mainly because Tan, Chuen Hwa ditched his blue for black and snatched all those goodies. 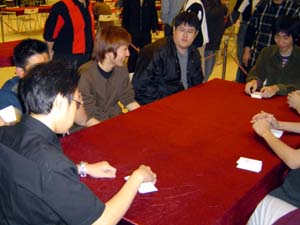 In conclusion I believe Gabe needs very good draws to win this tournament. I think Steven Tan from Singapore will win GP Hong Kong with his Broodstar, double Barbed Lighting, double Vedalken Engineer, Spikeshot, Myr Incubator deck. Will the stars like Masashi Oiso and his Fireball or Oliver Ruel with his Grab The Reins be able to stop this upcoming star? Only time will tell. Until then Gabe will be hoping to draw his artifact lands and cheap artifacts with his Nim Shriekers.