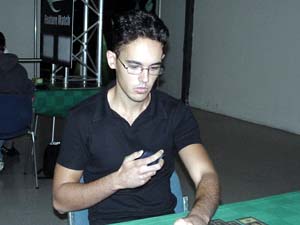 Di Tomaso is a former national champion from a couple of years back. Stephano Fiori was one of the trio of Italian players that reached the quarter-finals at Pro Tour Kobe earlier this year. This time Fiori is running blue-green control over big red while his opponent has Tooth and Nail with a red splash.

Di Tomaso went first and got to watch as Fiori shipped his cards back, again and again. Fiori elected to stick with four and was looking none too healthy. Di Tomaso tipped off he was playing Tooth and Nail as he opened with a Cloudpost and used subsequent Sylvan Scryings to fetch two more from his deck. Fiori had managed to find land with his four card land, but he also had a Viridian Shaman that looked like nothing more than a Grey Ogre in this matchup.

Di Tomaso headed off towards ridiculous amounts of mana as he fetched a mountain with a Solemn Simualcrum and then the fourth Cloudpost with Reap and Sow. When Fiori tapped out for a Simulacrum Di Tomaso used all that mana to throw a massive game-ending Fireball straight to Fiori's dome.

Fiori got to start with a full hand this game. Di Tomaso's first attempt at mana acceleration, a Talisman, was met with a Talisman and Fiori thought for a while before letting him have another. He cast Serum Visions in his turn and whacked the second Talisman with a Viridian Shaman.

Tooth and Nail seems like about 90% mana anyway and Di Tomaso fetched out a forest with a Solemn Simulacrum. Fiori didn't like the idea of him fetching a second Cloudpost and intervened with a Condescend. The blue-green player then sat back like every good control deck should. Fiori had the Last Word over and Eternal Witness and then switched to aggro as a Duplicant swallowed Di Tomaso's Simulacrum. A Shaman from Di Tomaso left both players staring off at each other with Shaman's before Di Tomaso got the boot in with a Reap and Sow that took out Fiori's second source of blue and fetched him his second Cloudpost. An Eternal Witness threatened Fiori's remaining island, only for Fiori to Condescend the returning Reap and Sow.

Fiori found a second island with a Simulacrum and had an Echoing Truth to save it when Di Tomaso attempted to remove it with a Duplicant. Another Last Word kept Di Tomaso at a reasonable mana supply. A second Duplicant finally nailed the bouncing Simulacrum but Fiori had a Karstoderm to hold Tomaso's 2-power army at bay.

Di Tomaso used Sylvan Scrying to fetch a third Cloudpost and then bust out a Mindslaver. Fiori cast Pulse of the Grid to either find an answer or lessen the blow.

The slaver went off giving Di Tomaso a Karstoderm, Echoing Truth, Eternal Witness and Last Word with which to sabotage Fiori. It got very gruesome for Fiori as he was forced to first cast the Karstoderm and then counter it with his Last Word. Then his Karstoderm in play went on a suicide mission into the red zone. Di Tomaso blocked it with a Duplicant and Witness and then forced Fiori to save his Witness with an Echoing Truth. 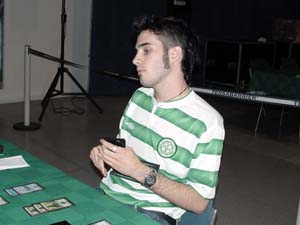