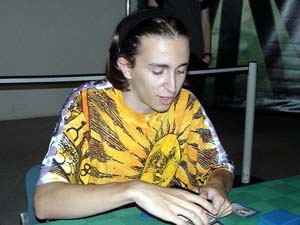 Ruel is one of the few pro's who made the trip down to Rimini today. His opponent, Enrico Nai, finished 6th in this year's Italian nationals. Nai is running Affinity while Ruel has a Tooth and Nail deck splashing one plain to cast Abunas.

Nai thought a while whether to keep his hands. Ruel mocked out his first couple of turns with face down cards while he waited. Nai's first turn Aether Vial was met with a Tel-Jihad Justice. Nai had a lot of gas in the tank and exploded out of the blocks with an Arcbound Worker and two Frogmites. A second Justice dispatched one of the frogs and then Ruel fetched a plains out of his deck with a Solemn Simulacrum.

Nai served again with a Nexus added to the assault. Ruel scryed for a land and then dropped an Oblivion Stone, looking to take control. Unfortunately for the Frenchman, Nai topdecked a Cranial Plating and a healthy 14 life suddenly dived into negative figures.

Ruel - "Affinity players always topdeck. It's insane. You should have seen them at World's"

Ruel led off with a Cloudpost and followed with a Sylvan Scrying to fetch another. Nai led off with a Worker and Ravager. The Ravager fell to a Tel-Jihad Justice only to be replaced with a Retriever and Frgomite. Another Justice exterminated the Frog and a third took out Nai's Great Furnace. Nai made it painful by throwing the land straight back at Ruel for five damage.

Reap and Sow with entwine took out Nai's Nexus and all of a sudden the Italian was stranded on one land with a Relic Barrier keeping it busy.

Two Nexi and a lot of land held off Nai's Worker, but he could pick away with the Retriever as Ruel was reluctant to allow Nai to get something worse back. He dropped on it with a Nexus in the next turn. Nai fetched back a Ravager.

Ruel was under pressure, he dropped an Oblivion Stone and held off the Ravager with the Barrier. Unfortunately he had to throw both Nexi in the way of a Worker that suddenly swelled to 5/5. The Barrier was protected and the Stone blown. It killed the Worker only for the counters to be slid onto a waiting Nexus.

Oxidise dealt with the massive Nexus but trouble kept arriving in the shape of a Disciple, another Nexus and an Aether Vial. Ruel kept in with an Oblivion Stone and then a Tel-Jihad Justice found a Platinum Angel on top of his library to give him a bit of breathing space.

Now Ruel could go on the offensive. A Shaman was followed by an activated Stalking Stones and within a couple of turns the match was heading to a decider.

Nai sent his no land hand back without too much deliberation. His second hand wasn't too exciting for Affinity - only an Atog on the second turn. Ruel smashed a Great Furnace with a Tel-Jihad Justice and Nai stalled badly, stuck with only a Blinkmoth Nexus. To make it worse Ruel fetched the Justice back. It smashed up a Worker. 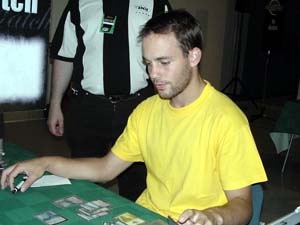 This time Ruel had all the answers. Nai found a second land and tried to mount an offence with the Nexus. Ruel shot that down with an Oxidise and blew up the Furnace with a Justice.

A few turns later an Oblivion Stone left the hapless Italian permanentless. Ruel cast Tooth and Nail without the entwine to fetch the Simulacrum that would enable him to fetch his ninth source of mana and an Eternal Witness.

Staring at an empty board Nai decided he'd had enough.