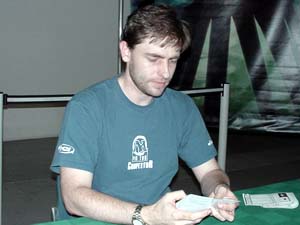 brings in a clash of the old and new. Manuel Bevand has been around for a while and enjoyed a bit of a renaissance at Worlds, where he cut through the field all the way to the semi-finals. Reinhard Blech is German player with a Grand Prix title to his name, but only had two byes here today. Bevand has the Cog deck from Worlds while Blech is running Affinity.

Bevand crucially went first, allowing him to Annul Blech's turn one Aether Vial. He couldn't do much about the Cranial Plating and Ornithopter that followed. A second Plating and the Ornithopter flew over Bevand's Salvagers for a whopping 12 damage. Bevand drew March of the Machines to cause the equipment to drop off, but was on such low life Blech could just attack him with them for the kill anyway.

Bevand looked to take early control with a fourth turn March of the Machines. Blech had managed to slip a Rigger out first though, and the lands pushed it up to a 4/4 on the way out.

Bevand was desperate for a second plains, but his deck was refusing to cooperate. He Anulled a Plating and a Chromatic Sphere. The Rigger was growing bigger with every artefact and Blech through away.

Bevand started to chump with random cogs off the top of his library. A Sunbeam Spellbomb clawed back some life and an AEther Spellbomb sent the Rigger back to Blech's hand. He then found a Trinket Mage. That found a Pyrite Spellbomb to take down Blech's AEther Vial before it could bring back the Rigger. 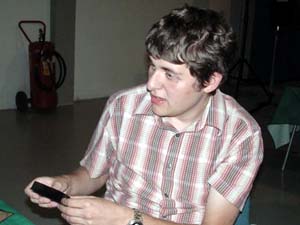 Bevand still couldn't quite stabilize as a Worker, Nexus and Cranial Plating kept chipping at his life total. The Frenchman died within a couple of turns, still unable to find a second plains.