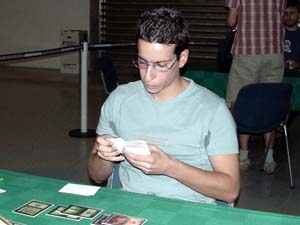 kept an artifact removal less hand against Jose's Ironworks deck and kicked off with Forest while Jose played a Darksteel Citadel and a Chromatic Sphere. The Red/Green player just played a Mountain on his second turn and Magma Jet'ed Jose on his end of turn after he played a Thoughtcast followed by a Chrome Mox imprinted with a Fabricate, which he used to play Serum Visions. Georgios just had a Witness on his third turn and Jose was able to play Krark-Clan Ironworks and Myr Incubator with enough artifacts left to sacrifice the Incubator. After taking a look at what Jose removed from the game, Giorgios conceded in the face of a horde of Myrs.

Georgios' hand was a bit better this time but still not great as he kept a five land, Oxidize, Viridian Shaman draw while Jose's hand seemed fine especially thanks to two Darksteel Citadel.

Jose played turn one and two Citadel along with a Chromatic Sphere which he used to play a Thoughtcast. Georgios was able to destroy a Welding Jar with his Shaman on his third turn. Jose used his turn to play a land and a Chrome Mox, which he imprinted with Fabricate to cast another Fabricate getting Myr Incubator indicating he probably had the other part of the combo already. The Greek player destroyed both the land and the Mox with a second Shaman and an Oxidize and Jose only played a third Darksteel Citadel and passed the turn. Facing three indestructible lands, Georgios summoned a Solemn Simulacrum but after Jose had no play again (choosing not to cast his Ironworks with four lands out), Georgios' sixth turn Molten Rain was enough to take the second game. 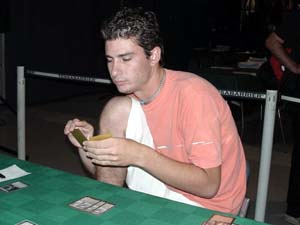 Both players kept their opening hands and Jose had an explosive turn 1 with a Mox, a land, a Talisman and a Welding Jar. The Greek player had an Oxidize for Jose's Mox, but it didn't seemed to bother the Argentinean too much as he was able to play a Thoughtcast, lay a Seat of the Synod and play Thoughtcast number two. Georgios had a second Oxidize for the Seat but no second land unfortunately for him. Jose then played a land and a Talisman leaving three mana open for an end of turn Thirst for Knowledge. Georgios found a second land on his third turn, but could only cast a Magma Jet while Jose went off with more card drawing and set up the combo pieces easily against his mana hosed opponent. There was nothing the Greek player could do to prevent the bloodbath.