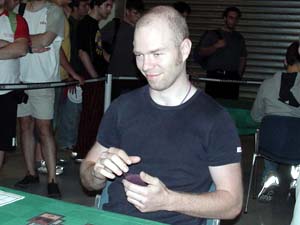 Cirigliano made it to the finals in GP Zurich, piloting a then kind of original blue-green deck featuring Crystal Shard and Eternal Witness. Both players are 5-2 right now meaning the loser will be out while the winner still will have to win his last round to advance to day two.

Delere was wondering why they had been featured as he seemed to ignore the recent accomplishment of his Italian opponent.

Delere won the die roll and kept his opening seven while Matteo had to mulligan once, not looking to happy with his six card hand. The German led with Mountain, Citadel and Talisman while Matteo played a Forest and an Island. Andre played a Nexus and another Mountain while the crowd's favorite missed two land drops and had to discard once. The German just kept playing lands while the Italian had to discard two more times before finding a third land. The German, out of action, chose to play a Furnace Dragon, which met a Condescend. The Italian player still had no fourth land despite the Scry and cast a Thirst for Knowledge during his main phase, still not finding a land. The German could safely get in for one point of damage with his Nexus and cast another Talisman before passing the turn. Matteo finally had a fourth land after playing Thirst for Knowledge number two. Andre played another Dragon which came into play as Matteo had summoned a Solemn Simulacrum, but it got bounced on the Italian's next turn as he tapped out to add another Solemn. Andre used the window to play his freshly drawn Arc-Slogger. Matteo next summoned an Eternal Witness bringing back an Echoing Truth, which along with a condescend took care of the Arc-Slogger. The Italian next played a Viridian Shaman destroying a Talisman, bringing the German player down to five mana sources as he seemed to be now in control of the game, which ended a few turns later after Matteo cast a Rude Awakening. Weirdly enough, Andre was holding a Pulse of the Forge the whole game and chose to never start taking mana burn against his mana hosed opponent to try to burn him down as well.

The German had a more active start with turn two and three back-to-back Slith Firewalkers while the Italian player just had lands. Delere played a turn four Arc-Slogger via Seething Song and Cirigliano still didn't have a Condescend to stop it from hitting play. The Italian drew his card for his fourth turn and just scooped. 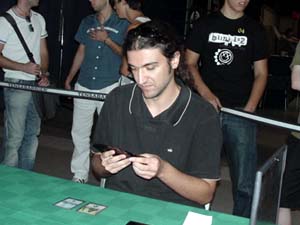 For the first time in the match, the Italian got to play first as both players quickly decided to keep their hand. This time, Matteo was able to Condescend the turn two Slith and followed with a Viridian Shaman. Andre destroyed the Italian's lone forest with a Molten Rain and could get in with his Slith on his fourth turn after Matteo attacked with his Shaman. The Italian then played a second Shaman and chose to attack with the other one. Andre got rid of the blocker with a Magma Jet and got another counter on his Slith and added a Solemn Simulacrum to his side of the board. The Italian played an Engineered Explosives for two to get rid of the Slith but couldn't sac it right away as he instead chose to save his Shaman from a Magma Jet with an Echoing Truth. The German could get Matteo down to twelve but lost both his creatures when the Italian cast the Shaman again and sac'ed the Explosives. Not much happened in the following turns, as the German took care of Matteo's two creatures with a Grab the Reins. After the Italian summoned a Solemn Simulacrum, Andre decided to throw a Pulse at his face making the life total's 14 to 8 in his favor as he was holding a second Pulse but only drew a land on his next turn and the Italian was able to take the match on his following turn with an entwined Rude Awakening.

I didn't do the exact math but it seemed like the German player could have won Game 1 or three, maybe both, if he had started taking some mana burn early on.

Matteo wins 2-1 and will have the right to battle it out in the next round, playing for day two.