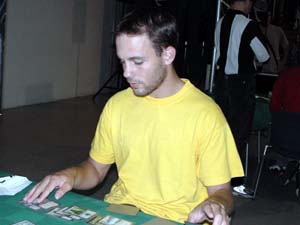 players have one loss and Blech tried to talk Ruel into a draw but the Frenchman declined as he would still make day two if he lost which doesn't seem to be the case of the German. Ruel is running mono green Tooth and Nail and Blech is with Affinity.

Ruel won the all mighty die roll and both players kept their hand, Ruel playing a Forest on his turn one while the German played a Great Furnace, a Chromatic Sphere and an Ornithopter. The land got Oxidized EoT and Ruel played a second Forest and Scried for a Cloudpost. Blech played another artifact land along with a Frogmite and passed the turn. The Frenchman had another Sylvan Scrying to get Cloudpost number two.

But Blech's draw seemed pretty good too as he summoned another Frogmite as well as a Somber Hoverguard on his next turn. Ruel chose to play a third Forest to be able to cast the Oxidize he got back with his Eternal Witness. He traded it for one of the Frogmite but chose to keep his Oxidize and went down to 13. Blech's only play was an Aether Vial, and Ruel summoned a Solemn Simulacrum on his fifth turn. The German then peeled a Thoughtcast that gave him a Disciple of the Vault, which was enough to bring Ruel down to 9 after he Oxidized an attacking Nexus. The French had the mana to entwine a Tooth and Nail on his sixth turn and got Platinum Angel and Leonin Abunas. Most affinity players would generally scoop in this position but it seemed like Blech could deal with this situation as he chose not too. It didn't really matter as Ruel next got to Mindslaver the German and drew a timely Arcbound Ravager. This time, it was enough to make the German scoop his cards.

Blech didn't seem too happy to have lost this first game as he seems to think the pre-sideboard game should favor him.

Neither player had to mulligan and Blech had three workers on board by turn two facing a Relic Barrier on Ruel's side of the board. The German followed with Thoughtcast and Arcbound Ravager while all the Frenchman could do is Scry for a Cloudpost.

After thinking for a couple minutes, it turns out he had the kill in hand as Ruel was tapped out. He just played a Disciple of the Vault and an Aether Vial, and sac'ed all his stuff dealing lethal damage. 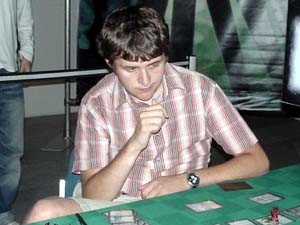 Both player kept their opening seven for the deciding game, and Antoine opened with Forest, Blinkmoth Nexus and Scrying for Cloudpost, while Blech had a Nexus and a Vial followed by a turn two Frogmite along with another Vial but Ruel was able to slow him down as he had a Shaman for Blech's Great Furnace on his third turn. The German had no third land and flashed to me his double Thoughtcast, double Plating, Hoverguard hand in disgust. Ruel had a turn four Oblivion Stone and got rid of the German's board (two Vials and an Atog) on turn five. He followed up with two Witness on the following turn, and had double Shaman when Blech finally drew a third land to cast his Ravager.