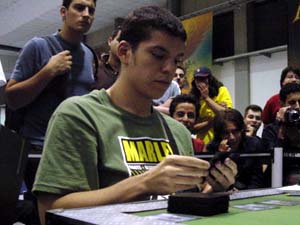 tournament has been all Domingo Ottati's so far. The young Italian player finished day one at the top of the standings. The first points he dropped was a draw in round 13 that guaranteed to put him into the top 8. Now one match is all that's stands between him taking the whole title. Florian Pils of Germany might have something to say about that though. Despite the dominance of Affinity, once again - as in Zurich - it is blue-green control versus Tooth and Nail.

Ottati went first and nothing happened for the first few turns as both players laid out lands. Pils went for a Solemn Simulacrum on turn 4, only for it to run foul of a Condescend. A second Serum Visions gave Ottati control over his card quality.

Pils went for an Eternal Witness, giving Ottati something to think about. Last Word prevented it from entering play. Ottati burnt through a Spellbomb in his turn and then dropped a Witness to fetch back Last Word.

This gave Pils a window of opportunity as Ottati was tapped out of all but an island. He had nothing to take advantage though, only attacking with a Nexus.

A Shaman came out for Ottati to accelerate the beats. Pils put a stop to that with a Duplicant. An Oxidize ensured Ottati maintained the creature advantage.

Pils was steadily accumulating a big pile of land, but was taking two a turn from Ottati's lone Shaman. He tapped 7 and dropped a Platinum Angel. Oxidize kept its stay from being anything but fleeting, although Pils whacked it with a Tel-Jihad Justice in response to try and set up his next couple of draws.

An optimistic Tooth and Nail didn't even draw the Last Word out of Ottati's hand as he countered it with Condescend instead. The Condescend was fetched back with an Eternal Witness and it really didn't look like the German was going anywhere fast.

He cast another Tooth and Nail, only for search. Ottati wondered what was up but countered it anyway. The next turn the Italian cast Rude Awakening with Entwine.

Pils failed to draw a land in his first hand and the second wasn't much better. Ottati could almost taste that title.

One thing Pils did find from his five card hand was plenty of land. One of them was a Blinkmoth Nexus and he started nibbling away at Ottati's life total. The Italian smoothed out his draws with a couple of Serum Visions. A Wayfarer's Bauble and Sylvan Scrying fetched some more land out of Pil's deck.

The first moment of interaction was when Ottati countered an Eternal Witness with Last Word. This left the way open for Pils to find a second Cloudpost with Reap and Sow. Despite his five card hand the German now had a threatening amount of mana. He used it to cast Platinum Angel. Ottati's hand didn't seem too strong, as Echoing Truth provided only a temporary answer to the Angel.

Ottati didn't find another one of a Serum Visions and started to take the beats. Another Eternal Witness was met with Last Word. Fortunately Pils had nothing unpleasant to follow it with when Ottati was tapped out.

The Angel and Nexus swooped into the red zone. Ottati didn't look to be exactly dominating Pil's double mulligan this game. Maybe all was not lost for the German.

Two turns for Ottati to find an answer. He went searching with a Spellbomb and then a Thirst for Knowledge. An Eternal Witness retrieved a Last Word, but wasn't exactly an answer to the Angel problem.

Viridian Shaman was however, and that looked to change the games' complexion. Pils tried to seize control again with a Darksteel Colosuss. Ottati met it with an Annul and took a point from the Nexus to drop to four life. 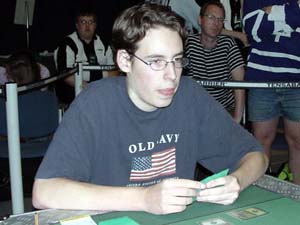 The next turn Ottati tapped nine land for Rude Awakening with Entwine.