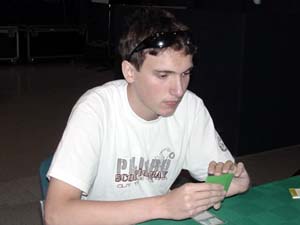 of these players ran the tables yesterday to leave themselves clear at the top of the standings with 9-0 records. While neither is well known, today should give them a very good chance of making a name for themselves. Rampini is running Affinity while Ottati has blue-green control.

Rampini didn't get off to a good start in the morning as he mulliganed down to five going first. Ottati went straight for the throat with an Oxidize on Rampini's opening land. Rampini's five cards had fortunately contained a lot of land and he was able to recover with two Seat of the Synod. A Myr Retriever was Condescended but Rampini was able to resolve first an AEther Vial and then a Ravager to go with his first turn Worker.

Ottati dug through his deck with Thirst for Knowledge, finding a Viridian Shaman to take care of the dangerous Vial. Despite starting 3 cards up Ottati didn't seem to be capitalising as a Myr Enforcer was added to the forces facing him. He bounced a Ravager with Echoing Truth.

Then in his turn Ottati finally took control. March of the Machines left Rampini with only one land. An AEther Spellbomb allowed Ottati to return his Viridian Shaman to kill the Enforcer. Left with only an Arcbound Worker and a Blinkmoth Nexus Rampini conceded.

Rampini got to play with a full hand this game. His turn one Vial was Oxidized but he had plenty of gas. An Arcbound Worker was followed by a Rigger and then a Disciple of the Vault. Ottati had no islands and could only fetch back an Oxidize with an Eternal Witness.

It was all to slow as a couple of Chromatic Spheres dug Rampini deeper into his deck, did two damage to Ottati through the Disciple and grew the Rigger. An Atog joined the assault, forcing a chump-block from the Witness. When a second Atog appeared Ottati picked up his cards.

Ottati set up his hand with a couple of Serum Visions while Rampini started with Worker, Frogmite, Thoughtcast. The Visions had found Ottati a forest to play Viridian Shaman, but the Seat of the Synod it blew up was quickly replaced by another.

Condescend prevented a dangerous Rigger from entering play. Then a March of the Machines chopped Rampini off at the knees, wiping out his entire mana base. He resorted to using lands a 1 point of damage through the Disciple. Only another fifteen needed. 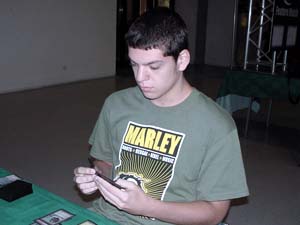 A Shaman blew up a Frogmite to reduce it to only 14 land required. It didn't seem like Rampini would get that much time. Another Shaman left him with only a Chromatic Sphere, Disciple and Glimmervoid. When Rampini's AEther Vial was Annulled he extended the hand.