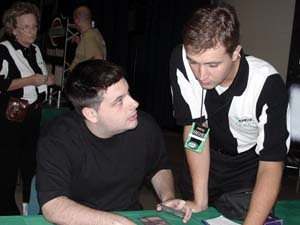 and Tosana were at the top of the standings after day one, not losing a single match but drawing once each. They got paired this morning sitting at table two of the Grand Prix. Meyer won GP Vienna, "a long time ago" to quote his own words, back in 2001 to be precise, while Tosana's still an amateur, as it's his first GP day two.

Tosana won the toss and opened with Darksteel Citadel against Meyer's Citadel, Aether Vial start. The Italian player then only played a Mountain and said go, not very happy to see two Arcbound Workers and three Frogmite hit the board on Meyer's second turn. Tosana had a third turn Arc-Slogger though but he chose not to block on Meyer's thirds turn, as Meyer had a Vial set on two. Meyer had no other play except for a second Vial as he was stuck on one land, and the Italian could safely untap on a healthy twelve lives, holding an Electrostatic Bolt and a Detonate. Meyer still didn't draw a land, and lost almost his whole army to the removal spells.

Tosana next took his turn to swing with the Beast, adding a Solemn Simulacrum to the board. The German finally drew another land, a Seat of the Synod, and could Thoughtcast, before passing the turn. Tosana activated his Blinkmoth Nexus and attacked with the land and the Arc-Slogger. Before blockers, the German left with only a Worker activated his Vial to put an Arcbound Ravager into play, but both got shot by the Arc-Slogger and Meyer's life total went down to 10. The Slogger was sent into the red zone again on the next turn only to get chump blocked by a Nexus, and Meyer put another Ravager into play on the Italian's end of turn but the game ended on the following turn went Tosana send his whole army in and Shrapnel Blast Meyer.

Both player kept their opening seven once again, and Meyer had yet another turn one Vial. He played an Atog on his second turn while the Italian could only put a second Nexus into play. Meyer added a second counter on the Vial, attacked with the Atog and added two Ravagers and a Frogmite to his board. The Italian discarded on his third turn and the second game was soon over.

The Italian seemed out of luck as he had to mulligan a one lander, while Meyer's grip included an Atog, a Ravager, a Worker, a Nexus and three other lands.

The Italian's turn two Talisman of Impulse faced a Nexus, a Citadel, a Worker and a Ravager. Tosana then had a turn three Solemn Simulacrum to ramp up to five mana while Meyer played a Disciple of the Vault on his third turn and attacked with his modular creatures and his Nexus choosing to go "all-in" on the land, as he hadn't seen an instant artifact removal or a Molten Rain yet in two games (seeing most of the Italian's main-deck thanks to Arc-Slogger), making his Nexus 6/6 and leaving himself with the land and a Disciple only into play, putting the Italian player on nine. Tosana had no play on the following turn and send his Solemn into the red zone, holding his own Nexus back in defence. He was also holding a Seething Song and a Pulse of the Forge, and when Meyer attacked with the Nexus, he chose to block, going down to eight, and pulsed the German player twice on his end of turn. He attacked with the Solemn, got rid of the Disciple with a Magma Jet and chump blocked the Nexus, pulsing Meyer again down to four and ended the job on his own turn with Seething Song and Arc-Slogger. 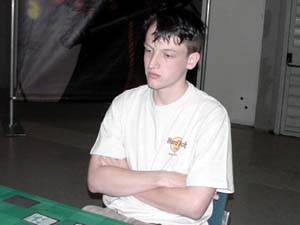 It seemed like Meyer played the game correctly but was unfortunate to face the only card that could race his strategy (the Pulse of the Forge), while the Italian player needed to get lucky once he chose to chump block the first time with his Nexus. He could have fell down to three instead, keeping his Nexus and pulsing the German player twice EoT, making the life totals 10-3, and then attack the German with his Solemn, forcing him to chump block with his Disciple. As it turned out, he even would have killed him right away as he drew a Magma Jet.