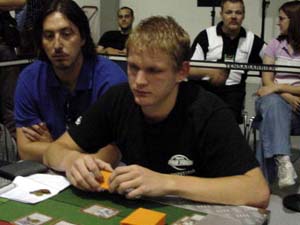 is playing red green while Florian runs mono green Tooth and Nail.
Luca wins the dice roll and elects to play but it is only a small advantage.
Indeed, not only does he have to take a mulligan, he also misses land drops on turn three and four.

Then, not only does Gasparac takes the mana advantage, but also the card advantage, as Luca has to play magma jet on Solemn Simulacrum to try and get a third land, and two turns later, despite he got a third land and played molten rain (on cloud post), one more simulacrum hit the table, only to be killed again, not by the croatian's justice, but by its owner oxidising him in response.
Two Reap and sow with entwine in a row get Luca out of red, and tooth and nail (witness and colossus) closed the game on next turn.

Pils takes in 4 bauble, 2 duplicant, reap and sow, creeping mold, sundering titan and mindslaver instead of 3 shaman, 3 justice and 4 oxidize

Once again, Luca plays first, and once again he has to take a mulligan,
"I guess I'm out of luck for the tournament" . Indeed, his opening hand is not very good with three lands; slogger and witness.

On his second turn, he chooses to play magma jet which gives him the fourth land (and second green) and Solemn. It gives him a chance to play turn five slogger with one mana untapped and maybe to win against a slow draw, or to put pressure and then try and draw Grab the reins.

And how is Florian's draws then ? Quite good actually. Even if he is not holding any tooth and nail, he plays bauble on the first turn and Solemn Simulacrum on the third which give him just enough forest to play Mindslaver on turn four.

At this point, things look really bad for Luca, with only two 2 powered creatures, five lands, and jet and a couple of Slogger in hand. At his upkeep he goes for jet on the German's solemn, keep molten rain, destroys a forest and attacks for four (20-14).
No hurry for Pils who just chooses to get for one more forest through Solemn and to search for cloudpost with Scrying.

That's when Luca tries his last chance, casts a slogger despite his three mountains and Florian'slaver, shoots Solemn and attack for four more (20-10). On his turn, the German sacrifices his slaver. Luca stands up, and invite his opponent to take his seat, provoking laughs and applauding of the crowd. Going around the table, he shoots Slogger with itself. 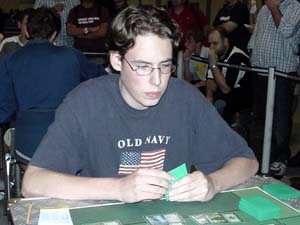 Luca "How many cards in your library?"
Florian "mine?"
Luca "no, mine"