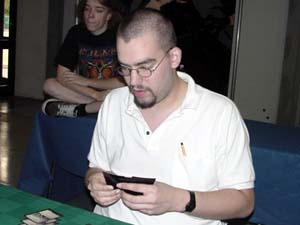 player made it into day two with a 7-2 record, and both lost their first round this morning which mean they have to win out to top 8. Mueller is with an original archetype, White/Green, while Joebstl is playing the more classic Blue/Green control deck.

Mueller opened with Forest and Wayfarer's Bauble and Joebstl had his own Bauble but with an Island. The Bauble allowed the German player to ramp up to a turn three Creeping Mold, and then followed with a not very impressive turn four Viridian Shaman, especially compared to Joebstl's turn four Solemn Simulacrum. Mueller had another Shaman to get rid of the arifact and was able to get in for two damage but the Austrian played another Solemn who got in the way of one of the elves while Mueller's own Solemn got annulled. After so many trades, the Austrian had more cards and more lands into play thanks to the card advantage provided by his double Solemns draw but Mueller was able to resolve a Pristine Angel as Joebstl seemed to be out of gas despite his many extra cards. The game ended a few turns later as all Joebstl could do is try to get rid of the Angel with a Duplicant.

Both player had a turn one Bauble again and when Mueller tried to play a Solemn on his third turn, Joebstl was ready with Condescend and followed with Eternal Witness getting back the counter. Mueller was able to resolve a second Solemn though, as the Austrian player only had two manas open. Joebstl was stalling on six lands, while Mueller was playing one a turn but he still chose to run his Molder Slug into Joebstl's Condescend. On the following turn, both Mueller's Solemn and Creeping Mold got countered, and the Austrian got back a Condescend with a second Witness, leaving four mana up. Mueller went for the kill playing a Rude Awakening without entwine, then an entwined one, but Joebstl had the Last Word, and left with no cards in hand, Mueller died to the Witness beatdown.

The Austrian had a better start as he was able to Condescend the German's first spell, a Creeping Mold. He then went for Reap and Sow on one of Joebstl's Island and this time, Joebstl chose to Thirst for Knowledge in response. Mueller summoned a Witness on his sixth turn, getting back a Reap and Sow, while the Austrian player could Thirst again. Mueller's entwined Reap and Sow met another Condescend and Joebstl followed with a Witness on his turn, failing to draw more land, despite the two Thirsts for Knowledge. The players traded their Witness and Mueller got his back with another one. Joebstl used a Rude Awakening to gain a mana so he was able to cast a Solemn leaving three mana up, a wise choice as Mueller had only seven mana and couldn't cast Reap and Sow with entwine without it getting countered by a Condescend as he settled for a Solemn instead. Joebstl still didn't draw a land and passed the turn, his Solemn facing Mueller's Solemn and Witness. 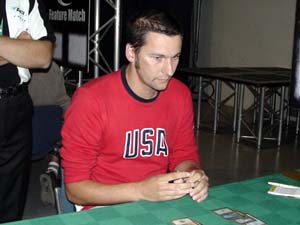 Mueller tried Reap and Sow this time, but didn't seem too happy to see Condescend number three get in the way. Both player then traded their Solemn and Joebstl finally drew another land as he seemed now in control with more cards in hand then the German. He played an Eternal witness getting Condescend back and passed the turn with five manas up. Mueller was able to resolve a Slug but it got bounced thanks to Echoing Truth EoT. Joebstl had a very good turn in this situation as he was able to play a ninth land as well as a Bauble and passed the turn. Mueller's Slug resolved again and got to stay on the table this time. The Austrian played another Witness, getting back Rude Awakening, which he used directly to gain mana and cast Duplicant with enough manas open to counter any threat with his Condescend. He let an entwined Reap and Sow resolve on the next turn, and got in for six damage as two Witness traded in combat leaving the Austrian with a 4/6 Duplicant, a Witness and the German with nothing but lands. When Mueller tried his own Duplicant, Joebstl was once again ready with Annul. Mueller was able to stay at 16 thanks to a Pulse of the Field. He then cast an entwine Rude Awakening but it got countered by the mighty Condescend and Mueller wasn't happy to see Joebstl keep both on top and sure enough, one of them was Rude Awakening and that sealed the deal.

Markus Joebstl wins 2-1 and stays in contention for top 8.