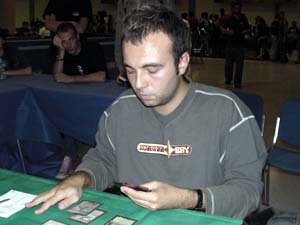 the Mirrodin block looking pretty much played out it's refreshing to see a different deck kicking around. Rather than play any of the usual suspects Austrian amateur Andreas Jagereder brought a novel blue-red March of the Machines deck with him to the tournament. It's doing rather well for him as he played the last round on the top table for the honour of finishing day one with a perfect record. That didn't happen but he's still keeping pace with the leaders. His opponent, the Italian Andrea Paselli, has the much more conventional Affinity deck.

Jagereder led off with Mountains and traded removal, an Electrostatic Bolt and Magma Jet, for Paselli's Arcbound Worker and Frogmite. A Thoughtcast found a bit more juice as a Ravager entered play.

Jagereder reached turn four with an island, but didn't have a March of the Machines. Instead he played a Darksteel Ingot that would give him the mana to fetch another mountain with his Wayfarer's Bauble.

Jagereder cost himself an extra point of life when he allowed Paselli to resolve a Disciple before sac'ing the bauble. The Ravager ate a land and knocked off 3 more points with the help of the Disciple.

Jegereder had nothing more interesting to do in his turn than an AEther Spellbomb. Jegereder couldn't allow a second Disciple to hit play and tapped out to Condescend it. He was now open to whatever Paselli could do. Paselli summoned a fresh artifact and they did the maths for a while before it came up with the scoop result for Jagereder.

Game 2 started quietly enough as the Jagereder Condescended a Ravager on turn two. Paselli followed it with a second Ravager and Frogmite. 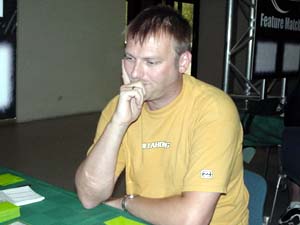 The game went worse for Jagereder when he missed a land drop. Paselli looked to take advantage with Cranial Plating. Jagereder stopped that with a Magma Jet.

A Seething Song powered Granulate gave him a lifeline only for Paselli to quickly recover with a second Plating and Worker to put it on.

Two hits and the match was the Italian's.