players have three losses and have to win out to have a shot at top 8 and both of them are running the KCI (Krark-Clan Ironworks) combo deck.

They both kept their opening hands, Summersberger taking a little longer to decide himself.
But it was Jose who missed two land drop after sacking a Chromatic Sphere and casting a Serum Visions, while the Austrian player got a leonine Elder and a prism out. He safely played an Ironworks next while Jose was still stuck on one land, helpless. The Argentinean finally drew a second land and tried to summon his own Elder of his Talisman of Dominance but I just couldn't let that happen. It didn't matter anyway as Summersberger had the Fabricate to end the game on the next turn.

Both players kept solid opening hands, with lands, mana acceleration and card drawers. Barbero had a turn two Pentad Prism, while Summersberger had a Talisman of Progress and a Leonin Elder. Barbero played a Thoughtcast followed by a Talisman and a Chromatci Sphere and passed the turn. The Austrian played Thoughtcast and Fabricate for Pentad Prism. Barbero untapped and he called for a judge.

Summersberger (to me): "I wonder what's next?"

It turns out Barbero wanted to make sure he could kill the Austrian with Goblin Canon, before he could gain lives with the Elder from the Myr tokens. The Argentinean played Goblin Canon, Ironworks and Myr Incubator, sacrificed the Incubator and before his opponent gains the lives, he sacrifices the 31 myr tokens to activate 31 times the Canon. 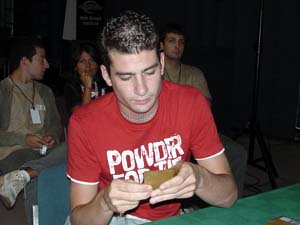 Both players once again kept their opening hands, and the Austrian player lead off with Chromatic Sphere. Barbero had a more explosive start with Turn one Chrome Mox, Talisman and Chromatic Sphere but Summersberger had his own Mox to ramp up to three manas on turn two. Barbero played a Serum Visions on his second turn, keeping one card on top before playing another Talimsan. Summersberger had an EoT Thirst for Knowledge. He untapped and cast Ironworks and Incubator, and Barbero, with his usual class act, pumped the fist when the Austrian passed the turn tapped out with just enough mana to sac his Incubator. He had all three pieces of the combo and Summersberger extended the hand when he saw the Fabricate.