players need four points at the beginning of the round to enter top 8, meaning while the looser will compete for top 16 the winner is almost in.

Palumbo chooses to play first, and kept a not too good opening hand featuring Talisman, Pulse of the forge, Furnace Dragon and four lands (two mountains two Citadels). When I ask them if they know what each other are playing Rocco answers with an enigmatic "I think I do", and he'd better be right as affinity is probably the only deck he can beat with this hand.

Andrea mulligans and plays on his first turn Seat of the Synod and Chromatic Sphere, good guess indeed. Even if his hand doesn't offer him any removals, Rocco gets a huge advantage as Andrea misses both creature and land drop on turn two. When he actually starts developing, playing Arcbound Worker, Disciple of the Vault and Thoughtcast on turn four, Rocco plays on his following turn Arc Slogger and shoots the disciple. Moriok Rigger comes in to try and slow Rocco down, but without the support of an Atog, Arcbound Ravager or Chromatic Sphere, it takes only one Slogger shot to kill it on next turn. It would only have been really annoying if Dragon didn't also come on the same turn, then it was lethal.

Palumbo took out 4 Pulse of the forge for 4 Detonate
Paselli almost took all his board in. He eventually let his third and fourth Rigger out to take in 4 Viridian Shaman 3 Oxidise 2 Terror 2 Shrapnel Blast for 2 Myr Retriever, 2 Myr Enforcer, 4 Disciple of the Vault, 3 Cranial Plating.
His plan is obviously to prevent the Dragon from touching the table by destroying artefacts and to kill Slogger with his four removals.

No mulligan this time for any of the players. Paselli's start seems good as he plays Vial turn one, Vial, Oxidise on great furnace turn two. But his hand only reveals one last spell, Arcbound Ravager and Palumbo still didn't play any removal. Then, the game freezes as two bolts kill Ravager and Nexus while a couple of Detonate gets rid of the vial. Though, things don't go too good for Palumbo who can't find his mana to play the Dragon he's holding.

And things go the same way for turns, with Andrea playing only very few guys, all being killed one after each other. He prepares the post dragon though, holding four lands, Terror and Ravager, and having Nexus and Glimmervoid on the table. Meaning he's not doing anything with the aggro deck against the control deck, but paradoxally it is going to be hard for him to lose that one.

And eventually, here comes the dragon. In response to it Paselli doesn't drop the Terror but a Shrapnel Blast he just drew, and saves his Glimervoid by activating Nexus.
On his side Rocco has 5 mountains left and three cards in hand, but these cards are one more dragon and a couple of Shrapnel Blast. One could wonder about how good they are in a deck featuring four copies of Furnace Dragon.

Pleased by his artifact removal, Andrea decides to take the fourth Oxidise and two Retrievers in and to cut three Archbound Worker as beatdown doesn't seem to be the key to the match up. Palumbo keeps Shrapnel Blasts once again and left Molten Rain in Sideboard.

Players have only 10 minutes left to play the third.

Paselli's turn two Frogmite is bolted and once again Paselli chooses to concentrate on controlling the game, playing Spheres and Thoughtcast before Ravagers.

Palumbo surely won't complain about it with his very poor hand, featuring a single Shrapnel Blast lost in an ocean of lands.

At least, he was probably glad to have it in hand when Andrea laid Moriok Rigger. But when on the next turn Ravager hit the table, things were getting really bad for Palumbo, now facing three nexus and a 3/3 Ravager as Paselli didn't want to let him time for playing the Dragon he actually didn't even have.

But magic can be a very surprising game sometimes. 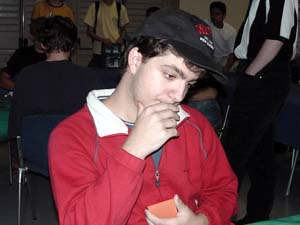 Paselli drew the Dragon from the top and cleaned the table, facing only three nexus.
When the judge announced the end of the round the game was very likely to finish a draw, except if Palumbo drew Slogger really fast. He eventually drew it on the fifth turn, one turn to late for the win.

When I asked them if a win was enough for top 8, both players feared about not being able to draw on the ultimate round. At least they know what they have to do know.