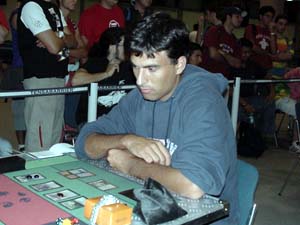 Paselli won the die roll and elected to play first. He opened with only a Tree of Tales. A second Tree of Tales followed and powered out an Arcbound Ravager. Gesiot matched with an AEther Vial and then an Arcbound Worker. Paselli went for a Moriok Rigger and Gesiot zipped out a Disciple through a Vial in response. The Ravager came in for only 1 damage as both players kept it cagey.

Gesiot was certainly teched out for the mirror match as a main deck Viridian Shaman smashed up the Ravager. The Rigger grew bigger and Paselli lost a life to leave the scores at 19 each.

Paselli dropped two Chromatic Sphere and then cast a Myr Enforcer for 2 mana. All Gesiot could do was peck through the skies with a Blinkmoth Nexus.

The next turn was very interesting as Paselli cast Cranial Plating and pushed both the Enforcer and Rigger into the red zone. A Viridian Shaman zipped out of the Vial to smash the Enforcer and then Gesiot threw everything he had in the way of the Rigger. The Rigger picked up the Plating at instance speed and the net result was a bloodbath that left nothing standing except for Besiot's Nexus. An Arcbound Ravager came out to give it company.

Paselli replenished his depleted forces with a Frogmite, Retriever and Atog. Gesiot snuck through another hit through the air, dropping Paselli to 11. Paselli pondered, before dropping an AETher vial and then thinking again. Retriever and Atog moved to the edge of the red zone, but Paselli didn't push them in straight away. Finally the Retriever was given a Plating and Paselli thought before sending everything into the red zone.

Now it was Gesiot's turn to think. A Frogmite stepped up to block the Atog while the other two creatures bashed Gesiot down to 8. It wasn't enough as Gesiot found a Frogmite and land. Gesiot ate everything with the Ravager, which promptly ate itself to drop the counters onto a waiting Nexus. The enormous Nexus flew over and ended the game in one hit.

Game 2 and Gesiot went in hard after Paselli's land. Oxidize and then a Viridian Shaman took out two Seat of the Synod. Paselli had a Frogmite and then added an Arcbound Ravager.

A turn - and an Oxidize and Electrostatic Bolt - later, Passeli had nothing. He recovered well with a Frogmite, Ravager and Worker. Both players laughed about the good quality of their draws.

A Plating put the offensive back with Paselli. He gave it a Worker and swung and a Shaman stepped up to trade in the red zone. Gesiot summoned a Disciple and ran some mana through a Chromatic Sphere to grow his Rigger.

A Frogmite took up the Plating this time and Gesiot let it through for 9 damage. He seemed to be on the defensive now, holding back with a Worker, Rigger and Disciple.

The turbo-charged Froggy charged in again and this time the Worker took it for the team. A second Disciple from Gesiot suddenly made it interesting. Eight artifacts hitting the graveyard would be enough to kill Paselli. He needed to find a way through. 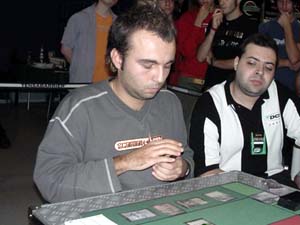 Paselli took to the skies and gave a Nexus the Plating. Gesiot blocked with his own Nexus and attempted to switch the counters from a Ravager to keep his Nexus alive. Unfortunately for him Paselli sac'ed his Chromatic Sphere and nailed the Nexus with another Electrostatic Bolt. The end result was both Nexi and a Ravager in the bin, Paselli down to 7 life and staring down a lethal Moriok Rigger.

He was in a horrible situation. He had to chump-block, but every chump-block would cost him life. He blocked with a Frogmite and then extended his hand.

Giovanni Gesiot beats Andrea Paselli to advance to the Semi-Finals.