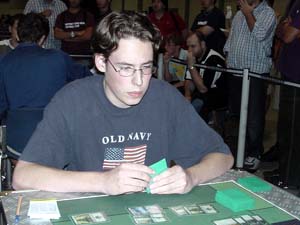 is a Tooth and Nail (Pils) on Affinity (Brodzak) rematch. Both players faced each other in round 14. Brodzak won a close match as Pils won the first game top-decking a couple times in a row, before Brodzak won the next two games getting fortunate in his draws too, especially as he peeled an Atog for the win in Game 2.

Brodzak declined the coin flip and asked for a die, and was glad with his choice as he won a very important roll. He had to mulligan once, but Pils made it even as he too took a trip to Paris. The German had to mulligan a second time though, and if Brodzak's opening hand was decent, it could be a very quick Game 1.

Brodzak had a first turn Citadel and followed with a Vault of Whispers and a Chromatic Sphere. Pils Oxidized the Vault so Brodzak couldn't bust a Frogmite out and the Czech got a Disciple out. Pils then had a Viridian Shaman take care of Brodzak's Aether Vial and a second Oxidize for Brodzak's second Vial. The Czech, stuck on one land, summoned a Worker and passed the turn while Pils drew his fourth land and was able to summon the mighty Solemn Simulacrum searching for a fifth Forest. Brodzak drew Vial number three, but Pils was ready with his third Oxidize and got a Cloudpost with a Reap and Sow as well. Pils then cast a Tooth and Nail without entwine getting a Platinum Angel and an Eternal Witness. Brodzak, still stuck on one land, simply scooped his cards.

Brodzak was happy with his opening seven but Pils had to take his third mulligan of the match.

Brodzak opened with Citadel Vial, but Pils was ready with his fourth Oxidize of the match. The Czech paused a while before playing a Nexus and a Chromatic Sphere. Pils was happy to see no play and took his turn to search for a Cloudpost via Sylvan Scrying. He probably wasn't as happy to see a Somber Hoverguard hit the table on Brodzak's side but it was the Czech only play along with a Welding Jar. Pils just played his Cloudpost and passed the turn. Brodzak untapped, swung in for three damage and played two Atogs of two Glimmervoids, a Nexus and a Darksteel Citadel. Pils Scried for a second Cloudpost and laid it into play on his fourth turn. Brodzak played a Disciple of the Vault, activated his Nexus and attacked with his crew. Pils Oxidized the Nexus and went down to nine and it didn't seem like he would survive the next turn unless he could somehow get a Platinum Angel into play. All he could do was Oxidize the Welding Jar, and he scooped his cards when Brodzak send his whole team in again.

Pils was now going to have the advantage of starting a game, maybe even keep a seven cards hand.

Indeed, Pils kept his opening hand, a fine one too (4 forests, a Solemn, an Oxidize and a Tel-Jilad Justice), and it was Brodzak's turn to mulligan. Brodzak was good to go with his next six and Pils got to Oxidize Brodzak's turn one Vial. He then made Brodzak sac his Welding Jar when he targeted the Vault of Whispers with his Justice. Brodzak played a Glimmervoid and an Arcbound Worker. Pils took his third turn to Scry for a Cloudpost and put it into play. The Czech had no third land but got two Disciple of the Vault into play. Pils used another Justice to get rid of Brodzak's only artifact land, and all Brodzak could do was attack the German down to fourteen. Pils then summoned a Solemn, and Brodzak played a second Worker. Pils summoned another Jens and said go. Brozak finally drew a land and was able to play a Frogmite and a Thoughtcast. It seemed like Pils would quickly be in trouble if he didn't draw anything good. Except this time, his top card was……. 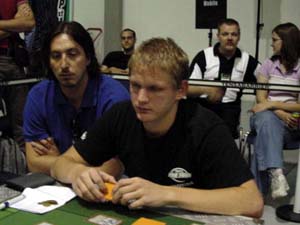 He slowly laid it down on the table, probably wondering if Brodzak had brought any Electro-static Bolt in (his only out). Brodzak paused a while and extended his hand wishing his opponent good luck for the rest of the tourney.