opened with an Ornithopter and an Arcbound Worker, praying that his opponent wouldn't Pyroclasm. All Minicucci could do was try to accelerate his mana with Birds and Wood Elves, so Rietzl was free to set up his board quickly – he got a pair of Myr Enforcers into play and a Disciple of the Vault. He used a Shrapnel Blast to remove one of the Vine Trellises and then attacked with his whole team. 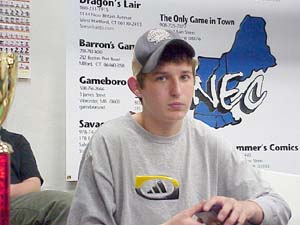 Domenic MinicucciOn the following turn, Minicucci cast a Duplicant, removing one of the Myr Enforcers and giving himself a large blocker. Rietzl cycled through some Chromatic Spheres and cast Thoughtcast. He then attacked and used a Welding Jar to save his remaining Myr Enforcer, taking out the Duplicant. Minicucci played out a pair of Birds on his turn, now having access to eight mana, assuming he and his creatures could survive the turn.

Rietzl played a Ravager so Minicucci had to block Myr Enforcer. Minicucci had nothing but a Colossus in hand so his outs were severely limited as Rietzl continued to attack every turn and finally Minicucci could not block both artifact creatures and had to give up the game. 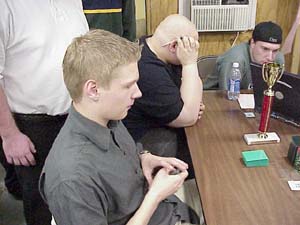 Paul RietzlBoth players were off to a slow start. Minicucci took a mulligan and despite having kept his hand, Rietzl did not have much to do till the third turn. Minicucci used a Skullclamp on his Wirewood Symbiote to make up the card economy he lost in Paris, and Rietzl brought out a Ravager and a Frogmite.

With second Symbiote in play, Minicucci was on the Viridian Shaman plan, trying to kill Rietzl's artifacts faster than they were coming into play. It was no easy task as Rietzl played out a second Ravager and a Myr Enforcer.

All Rietzl needed was an opening – an unblocked artifact creature that could get through. He was down to a Myr Enforcer, a Frogmite and a 5/5 Ravager against Wood Elves, Viridian Shaman and Wirewood Symbiote. If Minicucci blocked with a Symbiote he would be in a world of trouble next turn, but if he let one creature through, he stood to lose if Rietzl had Shrapnel Blast. Rietzl bluffed it perfectly, causing his opponent to block with just two creatures and dropping that Blast, lightning fast, onto the table.