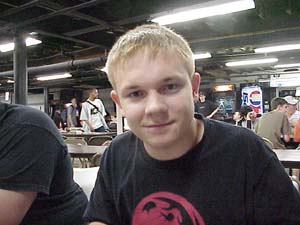 Jacob Bruce game was all about mana denial as Jacob Bruce used a second turn Smother to remove his opponent's Birds of Paradise to see him miss a second land drop.

"I knew it! I read it in your eyes," boasted a satisfied Bruce. He played out a Rotlung Reanimator and then used a Death Cloud for one to destroy one of his opponent's now two lands, and a Vine Trellis – setting him back to one mana yet again. Bruce himself did not suffer as much, as his Rotlung Reanimator left a 2/2 Zombie in its wake.

Withered Wretch and a 2/2 Zombie token were busy lowering Minicucci's life total while the Tooth and Nail player was stuck on two lands and unable to do anything about it.

Bruce mulliganed twice but it looked like he might recover early in the game. He slowed his opponent down by using an Echoing Decay on a Birds of Paradise, then summoned a Rotlung Reanimator and played a Grave Pact for good measure. Cabal Archon and Skullclamp came out next, making it Bruce look like the favorite in the matchup.

Before Bruce had the chance to equip either of his creatures, Minicucci cast Pyroclasm to take out both creatures, then a second Pyroclasm to remove the Zombie tokens they generated. He lost all of his own creatures too, and the board was now tied, both players in top-deck mode.

Minicucci significantly increased his mana base by playing out a pair of Wood Elves and then drew a perfect card for his situation – a Skullclamp! With plenty of mana and a pair of useless one-toughness creatures in play he was able to go off, drawing lots of cards, playing a Wirewood Herald, killing it to draw yet more cards and get a Shaman, and more. Soon he had a several creatures in play and enough lands to tap out and play Darksteel Colossus – without any Vernal Blooms in play. 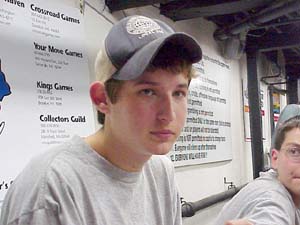 Domenic MinicucciIt was now or never for Bruce, who tapped out to cast Death Cloud for four. It forced his opponent to sacrifice all of his creatures, and killed most of Bruce's lands. Although it removed both hands, Minicucci was able to draw two cards from the Skullclamp ability after Death Cloud resolved. His next draw was a Wirewood Herald. With plenty of mana and a Skullclamp in play he was able to start his engine once again. At only two life, Bruce could no longer Death Cloud and he packed up his cards once Minicucci summoned a Symbiotic Wurm.

Bruce opened with a Skullclamp and followed it up with a turn-two Rotlung Reanimator (with help from Chrome Mox). He then replenished his hand by playing a Skullclamp and feeding Disciple of the Vault and Dark Supplicant to it.

Meanwhile, Minicucci was working on his mana base. He played out a Bird, then Wood Elves and a Symbiote. His Viridian Shaman took out the opposing Clamp and was soon joined with a Vine Trellis.

Minicucci took some damage from the Zombies, slowly taking them out in combat. Eventually he found a Skullclamp of his own. With plenty of mana in play he went through several of his smaller creatures to draw cards then cast Pyroclasm, killing three Zombie tokens and a Withered Wretch. Bruce's answer was to Death Cloud for two, keeping his opponent's mana in check.

While unable to cast Tooth and Nail anytime soon, Minicucci was now in perfect position to take advantage of the Viridian Shaman / Wirewood Symbiote combo he was holding. He took out Bruce's Chrome Mox and a Skullclamp, leaving him with nothing but a pair of Swamps. Then Shaman and its friends attacked several more times, winning the game without the help from any huge creatures.