McGee is a New Jersey player that is pretty well known on the East Coast PTQ circle. He won an NAC qualifier held at Grand Prix: Washington DC and is one of 124 players gathered here in hopes of winning the big prize. Ben Caless is a regular and an occasional employee of Academy Games in Ayer, MA – one of the closest stores to Milford, where the finals are taking place.

McGee is relying on the proven power of the Ravager Affinity decks, while Caless is playing one of the most rogue decks at this tournament. His mono-black Death Cloud control strategy is sure to raise some eyebrows in this tournament – but can it beat what is acknowledged to be the best deck in the format?

Caless mulliganed his opening hand, while McGee boasted that his draw is awesome. Caless was able to draw into a pretty good one himself though, as he opened with Swamp, Chrome Mox and Ravenous Rats. His second turn play was to cast Damping Matrix – shutting down multiple Skullclamps McGee already put into play. 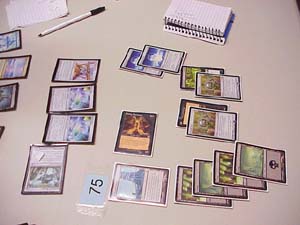 McGee summoned a Myr Enforcer, but his opponent was ready with a Dark Banishing. McGee drew some cards with Thoughtcasts and summoned an Arcbound Ravager, but he could not activate its ability under the Matrix and Caless soon played a second Matrix as insurance against a possible Shatter or Detonate.

Rotlung Reanimator was holding off McGee's Ravager while Caless was able to attack with a Blinkmoth Nexus. Pretty soon the Reanimator was turning sideways also, Caless trading a total of three damage for one every turn. Meantime McGee drew land after land, unable to put more pressure on his opponent.

McGee was holding a pair of Shrapnel Blasts – all he needed to do was get his opponent down to ten life, but his deck was not cooperating. Caless kept checking how many cards McGee had in hand. Eventually he decided to go for it, casting a Death Cloud for four. Caless was at sixteen life points – just two too many for McGee to snatch victory away from him. As is, he was forced to use one Blast to kill a Rotlung Reanimator (that way the Zombie token would die when Death Cloud resolved) and sent the second Blast at Caless' head.

Caless was now left with a Blinkmoth Nexus – neither player had creatures or cards left in hand. He played a Chittering Rat on the following turn, setting McGee back another turn and causing him to pack up his cards.

McGee traded an early Frogmite against a Withered Wretch and played a Myr Enforcer. Caless cast a Damping Matrix and then proceeded to remove an Enforcer with Dark Banishing. 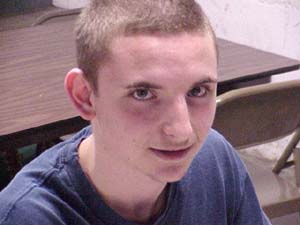 Mike McGeeSecond Enforcer and a Frogmite were in play with McGee holding on to two more cards. After doing some math, Caless cast a Death Cloud for two. McGee sacrificed his two Chromatic Spheres in response! Caless was quick to point at a Damping Matrix, but McGee explained that Sphere's is a mana ability, which is not shut down by this powerful artifact.

The board cleared and McGee kept the two cards he wanted. He then used Thirst for Knowledge to draw even more cards next turn, played out a fourth artifact land and dropped a pair of Frogmites into play. Caless had nothing but three lands and his Damping Matrix.

McGee swung, bringing his opponent down to eight life points. On his turn Caless summoned a Solemn Simulacrum. McGee happily showed him a Detonate, ending the second game.

This may have been the biggest beating administered this round.

McGee kept a sub-par hand after mulliganing to six. Caless played a turn 2 Emissary of Despair off a Chrome Mox, then followed it up with turn three Underworld Dreams.

Caless was dealing damage lightning fast to his opponent, despite McGee's best efforts. McGee summoned a pair of Arcbound Ravagers and sacrificed most of his artifacts in order to reduce the extra Emissary damage. It looked as though he might have been able to recover when he cast Pyroclasm to take out the powerhouse Emissary, but he was at a very low life total at this point. Caless was able to sneak in some more damage with his Blinkmoth Nexuses while chump-blocking the Ravagers on the ground.

Underworld Dreams finished the job. With Caless at five life points, McGee had just one out left – if he could draw a Shrapnel Blast, he would still be able to win the game with the Underworld Dreams effect still on the stack. McGee flipped the top card of his deck face up... but it was just a Frogmite.