two players at the feature match this round are among a dozen or so pros who qualified for the NAC. Paul Rietzl's star is definitely on the rise as he enjoyed a series of high finishes in recent professional events, including a pair of Grand Prix top 8's. Pete Guevin has been around forever, and although he keeps a lower profile than his brother Tom, he is an excellent player in his own right. The two players are teammates and friends, so the match promises to be very amicable. 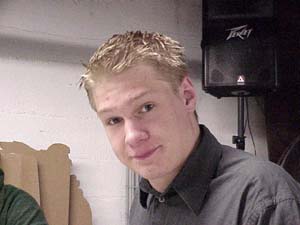 Paul RietzlIn fact, the two looked through each other's decks before the game began. Both are playing Ravager Affinity, their deck lists within just a few cards of each other.

Guevin had a better opening draw as he dropped a pair of Frogmites, a Myr Enforcer and a Ravager into play, made even better with a pair of Skullclamps. Rietzl was on the move-around-the-counters plan with two Ravagers, an Arcbound Worker and the all-important Disciple of the Vault.

Guevin attacked with a Frogmite and an Enforcer, each equipped with a Skullclamp, forcing Rietzl to think very hard about his blocks. He ended up trading away a Worker, having Guevin lose two life and draw two cards. Guevin drew yet another Enforcer and put it into play.

"I still have outs," Rietzl said. "I gotta make something happen quickly though." He cast Thoughtcast and dropped a second Disciple as well as a Myr Enforcer. A pair of Disciples in play definitely made him a favorite at this board position. "Question is, do you have outs now," Rietzl asked his opponent. "I don't think so." 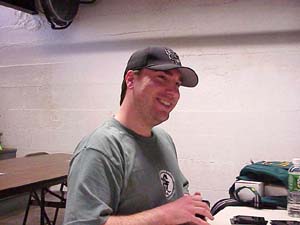 Pete GuevinGuevin cycled through his Chromatic Sphere to generate red mana, then sacrificed another artifact to Shrapnel Blast trying to remove one of the two Disciples. Rietzl sacrificed all of his artifacts to the Ravager in response, dealing the remaining fourteen damage to his opponent.

Guevin had to mulligan to six, but his new draw was quite reasonable. He opened with a Skullclamp, than used Detonate for zero to kill Rietzl's first land drop and an Oxidize to remove his Skullclamp. Although Guevin drew two additional cards by playing and Clamping a Worker of his own, he did not find a third land that turn, giving Rietzl at least some reprieve.

Rietzl played out a Ravager and a Skullclamp, then followed it up with Thoughtcast, Frogmite and a Disciple. It was one scary turn for Guevin, who finally drew his third land but didn't have very much to do with his mana. His hand consisted of two Disciples and two Thoughtcasts – while he only had red and green mana in play!

Rietzl summoned another Disciple and went for it, despite the threat of open green mana. He was in a safe position, even if Guevin did have an Oxidize. With no answers in hand, Guevin watched helpless as Rietzl sacrificed enough artifacts to his Ravager and end the match.