opening draw was extremely unimpressive, but he was stuck with it after a mulligan. So unlike the normal Affinity game, he did nothing but play lands for the first two turns of the game. 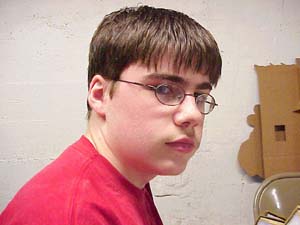 Justin BransfieldOlivson, on the other hand, was on the attack from the start. He opened with Birds of Paradise, then cast Wirewood Herald and a Wirewood Symbiote. With the Symbiote he began recurring a Fierce Empath, searching out Triskelion and Kamahl from his library.

Bransfield declined to block a Herald with his Ravager, but then made the mistake of going on the attack himself. Olivson returned a Fierce Empath to his hand and untapped the Herald, chump-blocked, and fished out a Viridian Shaman. A Shaman sat on the Ravager, prompting Bransfield to move the four counters onto a Frogmite.

Things looked grim for Bransfield, who got out a Disciple of the Vault but had nothing to stop Olivson from destroying one or two artifacts every turn with Wirewood Symbiote – Shaman combo. Olivson then played Tooth and Nail without entwine, dropping Darksteel Colossus and Kamahl into play. Bransfield opted to go on to the next game.

In this game it was Bransfield's turn to have an explosive draw. By turn three he had a Frogmite, Somber Hoverguard and a pair of Chromatic Spheres in play. Olivson drew his trusty Symbiote / Viridian Shaman combo, though, so it would not be easy for the Affinity player.

Over the next few turns the game became a pure race. Bransfield got out a second Hoverguard while Olivson found a second Shaman and was able to kill two artifacts per turn. Despite this huge loss of card economy, Bransfield was able to force enough damage through to kill his opponent before losing all of his artifact permanents.

Olivson slowed down his opponent by Oxidizing his first land and then a Skullclamp. He played out a pair of Symbiotes but did not have a Viridian Shaman that time. Olivson was riding his Skullclamp for all it was worth, killing off one of his Symbiotes. 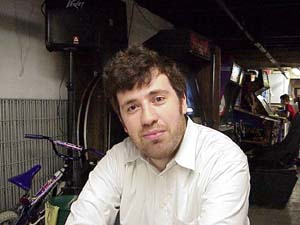 Mike OlivsonBransfield had no blue mana and only five artifacts in play with one untapped land. Here he was able to use the game rules to his advantage perfectly. Bransfield announced that he was playing a Somber Hoverguard and put it on the stack. Only then did he need to pay its costs, so he was able to sacrifice one of his Chromatic Spheres to generate blue mana and pay for the spell. Neither this reporter nor Olivson were sure this would work, but after a quick consultation with the judge it was confirmed.

Meanwhile, Olivson was back on the Viridian Shaman plan, despite it not working in the last game. He Clamped a Wirewood Herald to search out a Shaman and draw two cards, then used the Shaman to destroy a Chromatic Sphere, denying his opponent access to anything but red mana at the time.

Olivson then bounced a Shaman again and cast Tooth and Nail without entwine, dropping a Viridian Shaman and a Darksteel Colossus into play. Down to virtually no permanents, Bransfield had no outs left.