had a perfect 3-0 record coming into round 4. Clavette did not have as great a start – he was 2-1, but got paired up against the undefeated Fabiano. It was a rare match at the NAC where neither deck featured Arcbound Ravagers, but this was one such matchup. Fabiano played a monored Goblins deck, while his opponent brought a March of the Machines Blue-White build to the table. 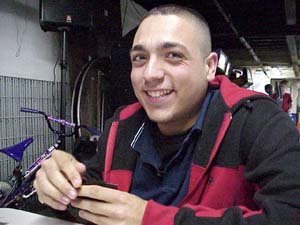 Gerard FabianoThe matchup is pretty bad for March of the Machines in the first game, but improves significantly after sideboarding.

Once Fabiano saw Plains and Islands, he was playing a very controlling game for a Goblin deck. He played a Skirk Prospector and a Skullclamp. On the third turn he played out Goblin Burrows and used it to pump up his Goblin instead of summoning more guys.

In the meantime, it was buying Clavette the time he needed. Clavette played a turn three Thirst for Knowledge and cast March of the Machines on turn four. This shut down the Skullclamp's card-drawing power, but allowed it to contribute more directly by attacking for a point of damage each turn.

On the following turn Clavette summoned a Darksteel Ingot – an indestructible 3/3 creature at this point – and Mana Leaked a Siege-Gang Commander. With Pulse of the Fields as his backup, he was now able to reclaim most of the life points he had lost to this point.. Wrath of God cleared Fabiano's side of the board and a second and then third Ingot entered play. Clavette played extremely conservatively, slowly gaining control of the board rather than trying to win the game a turn or two sooner. He did not want to take any chances.

Clavette played out a Future Sight and then another Wrath of God, clearing his opponent's board yet again and attacked with his Ingots. Up to over 15 life points and fully in control of the board, Clavette easily won the first game. 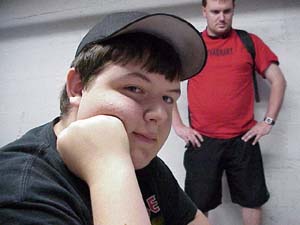 Raymond ClavetteClavette experienced some mana problems early, failing to play a third land for several turns. Instead he would play out a Silver Knight on turn two, Talisman on turn three and an Ingot on turn four. Fabiano's draw was far more explosive.

Turn one Skirk Prospector allowed him to cast a second turn Sulfuric Vortex. He then summoned a pair of Goblin Warchiefs but his offense was stalled by the lone Silver Knight.

Down below ten life points, Clavette triumphantly slammed a Worship into play. Fabiano's mono-red deck had no way of dealing with it. March of the Machines entered play next, giving Clavette yet another creature Fabiano couldn't deal with – his Ingot. Fabiano, who had been taking plenty of damage from his own Vortex, fell a few turns later.