did not have an ultra-fast start, but he did manage to get two Frogmites and a Skullclamp into play by his third turn. Considering the matchup, Tautic's third turn was far more impressive. With help from a Talisman, he played out March of the Machines, effectively Armageddoning his opponent. On the following turn he cast Wrath of God, leaving no permanents on his opponent's side of the table at all. 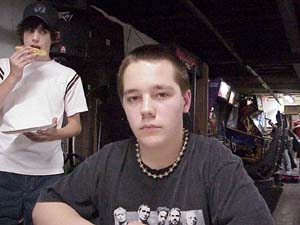 Sean MorganFor the rest of the game, the only thing Morgan could do was to draw a card and pass while Tautic summoned a Damping Matrix and attacked for three every turn.

Tautic seemed content: "That's how it is supposed to work," he commented.

Morgan started out with Glimmervoid, Welding Jar and a Disciple of the Vault. It was an aggressive opening play, but there's little a blue-white deck can do to kill that Jar on turn one, so he was safe. Problem was, he had nothing to back up his early aggression. On his second turn, Morgan simply played a land and said go.

Meanwhile, Tautic was playing around a Mana Leak. He could have played March of the Machines on turn three, but decided to cast a Darksteel Ingot instead. Still playing around Mana Leak, he cast a Thirst for Knowledge on the next turn. Tautic was finally able to bait the Mana Leak from his opponent's hand when he tried to gain four life with Pulse of the Fields while at fifteen. He then untapped and used Purge to destroy the Ravager. Morgan sacrificed a Welding Jar and several of his lands to bring his opponent down to eleven life points. Tautic then played out his March of the Machines, destroying Morgan's remaining artifact land and conveniently also getting rid of his Glimmervoid.

A second Purge took out the Disciple, once again leaving Morgan's side of the table devoid of permanents. Tautic's several artifacts ended the game in just a couple of attack steps.