Chambers was one of the two defending champions playing in the NAC this year (Tom Guevin is the other, and as of this round, he was undefeated and playing at table 1). Adam's opponent was Jonathan Morawski from Gamer's Heaven; he was barely hanging in contention at 3-2, while Chambers was paired down with a 4-1 record. 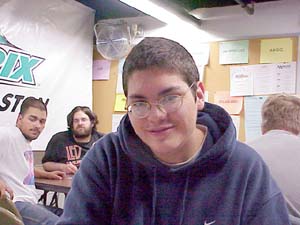 Adam ChambersBoth players were forced to take a mulligan and neither had stellar starts with their new six-card hands. Chambers summoned a Worker and a Disciple and it was not until turn four that he got out a Frogmite. Using his three mana, Morawski cast Seething Song and used this wanna-be Dark Ritual to bring out an Arc-Slogger.

On the following turn, Morawski let go of thirty cards of his library. He killed a pair of Disciples and then targeted a Frogmite, only to have Adam drop a Scale of Chiss-Goria into play in response.

Having saved his artifact creature, Chambers was able to play a Myr Enforcer as well as a Skullclamp on the following turn. Morawski attacked with his Arc Slogger and cast a Solemn Simulacrum. The race to the Dragon was on.

A second Arc-Slogger came into play. Chambers cast an Arcbound Ravager after attacking with his Myr Enforcer. On his turn, Morawski used Pyroclasm to try to get rid of the Ravager; in response, Chambers gave it a bonus with a Scale and then sacrificed a Scale to it, making the Ravager 2/3 and allowing it to survive Pyroclasm. Morawski summoned a third Arc-Slogger, but chose not to attack. 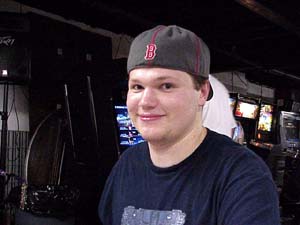 Jonathan MorawskiChambers was now on the offense. He played a third artifact land, a second Skullclamp and a second Ravager – then attacked with his other two creatures. Morawski had to block and when the dust cleared, he was left with one Arc-Slogger on the table (to his opponent's 8/8 Ravager), a single land and a Skullclamp. Suddenly it was looking as though Chambers was making a comeback – but only until Morawski tapped out on the following turn and played a Furnace Dragon. Left with no permanents in play and facing a 5/5 and a 4/5 on the other side of the board, Chambers scooped up his cards.

Both players mulliganed yet again and Chambers was forced to keep a one-land hand. Morawski further helped matters by killing his lone land. Morawski played out three artifact lands and a Seething Song to cast a turn four Furnace Dragon. He had to lose most of his own lands, but had more in hand. The game did not last five minutes.