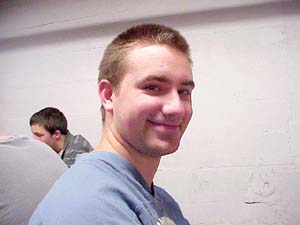 Ray Tautic was the end of the road – the last round of swiss play. Both of the players ware at 5-1 record, but they knew that it was unlikely that anyone with 5-2 is would make Top 8. The winner of the match would advance, while the loser would probably walk away with a $125 cash prize.

Shay was off to a strong start, bringing out a bunch of artifacts. Tautic did what he could to slow down the beating – he used a Mana Leak to counter a Myr Enforcer, used Wrath of God to kill a few Arcbound creatures and finally managed to get out a March of the Machines.

The problem was, Shay managed to play a Ravager just one turn before March came into play. He was able to sacrifice all his lands that were otherwise going to die anyway and create a 6/6 monster. Tautic held out for another turn or two, able to survive thanks to Pulse of the Fields, but Shay drew and played a Pyrite Spellbomb that could not only attack, but also eventually was sacrificed (using Glimmervoid mana) to deal the last two points of damage. 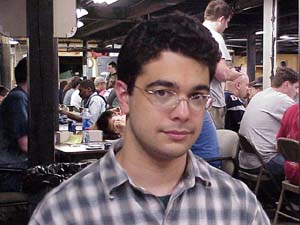 Richard ShayThis was a great game to watch for the spectators due to the fact that Shay had no idea what his opponent's deck was supposed to do, and loudly proclaimed so. He read a Mycosynth Lattice when it was discarded to Thirst of Knowledge, and had to carefully read March of the Machines when it was coming into play.

Shay quickly got out a pair of Frogmites and an Arcbound Worker. Tautic's hand seemed to consist of nothing but lands, Talismans and Damping Matrixes. He used a Matrix to shut down a potential problem from the Skullclamp that Shay had in play, but had no game past that.

"You need to cut that really well," Tautic said staring at near-infinite mana on his side of the table after resolving a Flooded Strand ability. He tapped his deck and drew... another Talisman.

He top-decked a Wrath of God when he was down to three life points and his opponent attacked with a pair of Blinkmoth Nexus. Tautic's next card was a Purge and his only hope would be that his opponent would attack with just one creature, but Shay was taking no chances and attacked with both of his Nexuses again, winning the game.

Despite an overwhelming matchup advantage, Tautic could not pull out this last all-important match, allowing Shay to advance into the single elimination rounds.

3 Vault of the Whispers
60 Cards