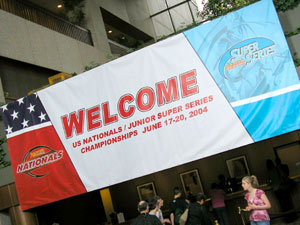 177 players have come to Kansas City this weekend, looking to earn a spot on the United States National Team, and a piece of the $70,000 up for grabs. This tournament is the stuff of Magic legends, as it has existed since before the first Pro Tour took place. Names such as Jon Finkel, Mike Long, Matt Place, Justin Gary, Mark Justice, Eugene Harvey and Zvi Mowshowitz made their mark at this tournament, often using it as a landmark accomplishment to either jumpstart a Magic career, or solidify a reputation. This weekend the tradition continues, as a new generation of American competitors look to make a statement come Worlds, and reclaim the ground that has been lost recently to European and Japanese players in international competition.

Today's rounds will feature three rounds of Standard, followed by four rounds of booster draft. This will be the last major tournament to feature a Skullclamp dominated Standard environment, and it's been the defining factor in playtesting. Certainly, there will be plenty of Affinity and Goblins to go around, although in past years U.S. Nationals has often been the tournament where metagame destroying "grenades" are created to blow up a stagnant rock-paper-scissors environment. Will something surprising emerge once more, or will we need to wait for the post-Skullclamp, Fifth Dawn legal tournaments to come for new tech to be revealed? What impact will Fifth Dawn have on draft strategy? Will players look to splash other colors to optimize Sunburst, or will they stay with tried and true strategies? Stay with our coverage all weekend long as the questions are answered, and another chapter is written in the long history of U.S. Nationals.