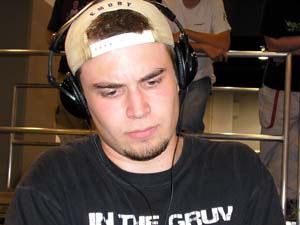 At the beginning of the day, there were 177 players entering the tournament with clean records. 177 players tied for first. Seven rounds of Swiss later, there were still fourteen. No single player managed to finish the day undefeated, but an unprecedented number ended up at 6-1. Tiebreakers gave the nod to Brian Kibler, who had a perfect 6-0 record before his White/Green deck fell to Bill Stead's Pristine Angel in round seven. This is actually the second year in a row that Kibler has entered Day Two of US Nationals in first place. Last year he was undefeated and finished the Swiss in second place before falling to eventual champ Josh Wagener in the quarterfinals.

How are the players from the Grinders doing? Scott Lipp, who qualified in the final Limited Grinder, is at 6-1 with great tiebreakers that have him in third place. Doug Prosak, from the same Grinder, is in 32nd, two spots above Adam Prosak, who in fact is not his brother. Mike Hall and Tony Goodson are also at 5-2.

Today there will be three more rounds of draft followed by four more rounds of constructed. Skullclamps will battle Oxidizes, Arcbound Ravagers will fight with Arc-Sloggers, and at least one Darksteel Colossus will swing for eleven. With so many players tied for first place, almost anything can happen. Who will have a chance to make the 2004 US National Team?

Keep it here to find out what happens.