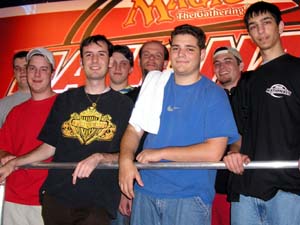 The Top Eight has been decided. After fourteen long rounds of Swiss, Alex Melnikow has emerged as the lone player with 33 points. He combined a 5-2 in Limited with a 6-1 in Constructed and faced Neil Reeves in the final round. An abundance of intentional draws meant that one player would make it in as top seed and the other would miss completely. After a deck check, Neil Reeves was awarded a game loss and a quick second game later, Alex had won the match and the honor of entering the final day in first.

All seven of the others managed to intentionally draw their way in. With seven being an odd number, there must have been one unfortunate player who tried a draw but will be sitting on the sidelines in the finals. In the end, it was Alex Shvartsman who finished in the unenviable position of ninth.

Craig Krempels also made the risky decision to draw with his opponent, Ben Zoz, in the final round. Afterwards countless friends were walking up to him and simply shaking their heads, envisioning a repeat of Yokohama, where Craig was in a similar situation and managed to draw himself out of the Top 8. It eventually became clear that Craig, who had the worst tiebreakers of those needing to draw in, needed Tony Goodson to lose so that there would be an extra open slot. Goodson, who had been paired down, did in fact lose, so Craig just needed to beat either Shvartsman or Michael Aitchison out with the recalculated tiebreakers. He could hardly believe it when his name was announced in eighth place and he had finally made his first final day at a premier event.

Brian Kibler proved his consistency yet again as he maneuvered his way through the Swiss and ended up gliding in at fourth. His White/Green control deck will face off against Billy Postlethwait's Ravager Affinity. Billy hasn't lost a Constructed match this weekend; his 6-0-1 record made him the Constructed champion. Then again, if anyone can take him down, it's Kibler.

Dave Humphreys and his Goblins are facing a tough matchup in Ben Zoz's Blue/White March of the Machines control deck. Finally, Bill Stead and his White/Green control should have an easier time against Michael Aitchison's Beasts deck.

It's a mix of the old and new. Some established pros and some who have yet to prove themselves. Four of these eight will get the chance to do so at the World Championships in San Francisco; three as part of the US National team and one as an alternate player.

The Top Eight will take place today. Seven matches of best three out of five Magic later, we will have a 2004 US National Champion!