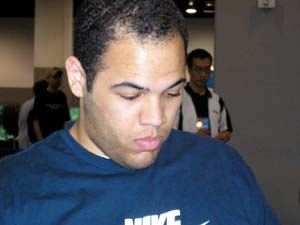 always charismatic Osyp is a former Pro Tour Champion, and usually attracts a considerable amount of attention whether in the feature match area or through his "interesting" articles. The strength of his finishes have faded recently, although he did come in second recently at Grand Prix D.C. with teammates Adam Horvath and Patrick Sullivan. He started off the day on track to make an impact once more in individual competition, emerging from the Standard rounds with a 2-1 record. A good draft here would make all the difference for tomorrow.

The first pack provided an easy choice, as Osyp took Clockwork Dragon, passing Pewter Golem and Neurok Spy. Despite opening up a Dragon, Osyp was shaking his head the whole time, seemingly unhappy. The second pick provided a Blinding Beam, and oddly, he drafted Gilded Lotus third over Pewter Golem, Vulshok Berserker and Soldier Replica. Goblin Dirigible and Leaden Myr followed fourth and fifth, as Osyp wasn't really committed to a color far into the pack. He took Vulshok Gauntlets over Alpha Myr and Bottle Gnomes, and got a Fireshrieker seventh.

At this point, almost all of Osyp's playable cards were artifacts, leaving his options wide open for Darksteel. This seemed to work to his advantage when he got a Furnace Dragon, and he leaned more into white by taking Razor Golem over Echoing Ruin. The third pack provided practically nothing in white or red, so he counterdrafted a Tangle Golem. When a second Tangle Golem came next he switched gears, drafting it and going into green. He then took Echoing Courage over Tel-Jilad Wolf and an Arcbound Stinger over Roaring Slagwurm. Pteron Ghost and Tel-Jilad Outrider showed up late into the pack, providing Osyp's deck with a little more depth.

Osyp took Sylviok Explorer over Cranial Plating as his first pick in Fifth Dawn. Skyreach Mantas were taken second and third, and a nice gift came around fourth in Loxodon Anchorite. As the set concluded, Osyp got a pair of Skyhunter Prowlers late, in addition to Leonin Squire and Stand Firm.

TW: How about some specifics?

Osyp: I couldn't tell what was going on, you saw the packs. I couldn't read any of the signals. I got shipped a Blinding Beam second, and he took a common over it. There's no common I take over Blinding Beam, so I figured "Okay, I'll go into white." I never saw any white though. I didn't have a chance to get into any color, so I kept taking artifacts. I went into the second pack not committed, then I opened this [Furnace Dragon], so I was like "Okay, I'll try this." Then I didn't see any red, and I hate going into red anyway. It was really frustrating. Then I saw Tangle Golem so I just counterdrafted it, but then I saw a second one so I figured I'd go into green and try to do Sunburst. I figure that if worst comes to worst and the deck is really bad, I can go into Sunburst and hope for the best.

TW: Have you been doing a lot of drafting with Fifth Dawn then? A lot of pros seem uncomfortable since it's fairly new.

Osyp: I haven't done that many, but the few times I have, I just try to force white. I thought I was in a good position after getting the second pick Blinding Beam, but the guy may have gone into white or something. I did get a lot of white cards late in Fifth Dawn though, so maybe the packs were just bad for white. I'm not sure what happened.

TW: It's kind of weird, because I think a lot of players would have just passed the Blinding Beam, because white was often avoided like the plague. That may have changed with Fifth Dawn, I'm not sure.

Osyp: I know people say it's overdrafted and I agree, but if I get a Blinding Beam passed to me, then I'll take my chances. If I get other white cards, then I'm set.

TW: When you opened the first pack, you were shaking your head. I thought you would be happy with Clockwork Dragon.

Osyp: I hate Clockwork Dragon. I was like, "Alright, I have to take it." It's not a card I'm really happy with though.

Osyp: It's a seven mana dude, you know? There are so many cards I'd rather have. But whatever, you take it and hope for the best. They're probably just going to Echoing Ruin it. But I've seen people win with it, so maybe I'll win with it.

TW: Why did you take Gilded Lotus third pick? There were lots of cards in that pack that most people would have taken over it.

Osyp: Somebody told me that Gilded Lotus was good.

TW: Who told you that?

Osyp: I dunno, [Josh] Ravitz. Maybe he was lying. For some reason it was stuck in my head and I just went "Eh, Sunburst. Maybe it's good." I probably should have taken the Pewter Golem, because that was probably the next best card. I was looking at the Berserker too, just because I liked red-white. I dunno, I probably messed that one up. I had the Dragon, and I figured I could ramp up.

Osyp: I hate both of those cards.

TW: Most people really hate the Gauntlets though.

TW: You didn't commit to any color in the first pack. Was that intentional, or just the way things worked out?

Osyp: It just sort of happened. Maybe I should have taken Pewter Golem more aggressively, I could have gotten two. I probably messed up the draft, I just didn't know what was going on. I thought I would get a clear signal and I don't feel like I got one.

TW: The Furnace Dragon pick…obviously you have to take it.

Osyp: The thing about Furnace Dragon is that I think it's really insane, and I figured I could either be red-white or green-red. Well, not green at that point. But the other picks were Chittering Rats and Grimclaw Bats, I wasn't heavily committed to black, and you have to be for those cards. I figured I'd just take Furnace Dragon and hope for the best, and it didn't work out.

TW: Why did you take Razor Golem over Echoing Ruin?

Osyp: Because Blinding Beam was my best card, and the red in the third pack is bad. If I don't get a lot of good red stuff in the second pack…

TW: Then you're just splashing for Furnace Dragon and you obviously can't do that.

Osyp: Yeah. Blinding Beam was my best card, so I just took Razor Golem. If more red came that would have been great, but if not I'd just be white and whatever. White is generally good in the third pack.

TW: Echoing Courage over Tel-Jilad Wolf…I'm guessing it's a trick and you figured you'd get plenty of creatures anyway.

Osyp: Yeah, and I don't like the Wolves that much. Between those two I usually take Courage.

TW: And Roaring Slagwurm, you don't like that guy either?

Osyp: Nah. It's just another big guy. I don't like him that much.

TW: First pick in Fifth Dawn kind of surprised me, taking the Explorer over Cranial Plating.

TW: Do you think that the Mantas are going to be good here? I was surprised that you were taking them so early when you didn't have that much Sunburst support.

Osyp: Well even if they're 3/3s, that's still pretty good.

TW: Sure, but your deck is two colors.

Osyp: Well, I've got Explorer, Leaden Myr and Gilded Lotus, so I'm pretty sure I can make it 3/3. I also thought I'd get a Bauble or something, but like I said I'm not good at this format yet. I probably made infinite mistakes.

TW: So how do you think you'll do?