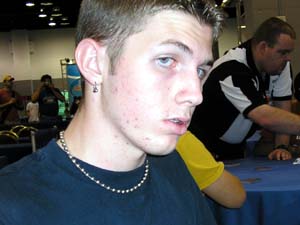 Tamblyn is a seventeen-year-old Magic player from Phoenix, Arizona. He finished in the top 8 at Grand Prix: Oakland earlier this year, and came in 13th at Pro Tour: San Diego in May. He 3-0'd the first Constructed portion of Nationals this year, which, by his own estimation, is a miracle, since he considers himself a Limited Specialist.

Mitchell: "When I sat down, I planned to force White… if it had been before Fifth Dawn, I probably would have gone Green with the Fangren Hunter, but I figured people have started drafting Green again, since Sunburst seems pretty decent in the last pack.

I feel like the table passed me some very good picks (like the early Icy Manipulator), but I was having a hard time late because I was passing things like Spire Golem so as not to go too deep into a second color and keep my options. I ended up with three Blue cards and two Black cards, but I had to pass out some real power cards like Devour in Shadow to keep my mana base in shape. Generally when a new set comes out, I like to play the cards that are more consistent, and avoid the rares or picks that might be confusing. A lot of people are attracted to cards with gold symbols on them, but unless they are really good or I don't have other good choices, I tend to avoid them.

I had a really tough choice in the first Fifth Dawn pack between Acquire and the new Looter (Thought Courier). Think I made the right call, because Acquire seems very good, but Thought Courier is probably a little more consistent.

Predictions: Probably 3-1. I think the deck is pretty good, but not ridiculous. It's just solid. I'm gonna run seventeen land, and that may be a mistake, but I can always sideboard it out."

These were the pick choices Mitchell ruminated over during the draft. The actual cards he chose are in bold.

Pack 7: Irradiate and nothing

Pack 8: Arcbound Stinger and Nothing