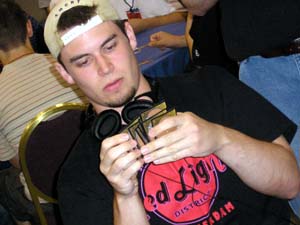 Kibler went on a tear at Nationals last year, going undefeated before clinching his Top 8 spot and making a few draws and concessions in the final rounds. Despite dominating the swiss, he had a bad matchup in the Quarterfinals, and had to go home without a spot on the National team. Thus far he's on the same track as last year, finishing yesterday's swiss rounds in first place. He's hoping to keep the momentum going today, and take that final step on Sunday towards being a member of the American team for the first time in his career.

Kibler has said that he prefers drafting white and green, so he was more than happy to start things off with a pair of Arrests. He took Talisman of Unity third pick, over Goblin Replica and Myr Enforcer. The fourth pack provided a choice between two solid white cards in Raise the Alarm and Soldier Replica, but he chose to shift into a second color with Predator's Strike. He solidified green with Wurmskin Forger sixth, and got Journey of Discovery ninth. The Darksteel pack was abysmal, containing Auriok Glaivemaster, Darksteel Ingot, Viridian Acolyte, Eater of Days, Death-Mask Duplicant and Tel-Jilad Wolf as the "playables". Kibler took the Wolf first, and a Tangle Golem second, disappointed that he had to pass Pulse of the Forge. Loxodon Mystic came third, and Dismantle was too good to pass. Fangren Firstborn was a great gift as a fifth pick, and a pair of Tangle Spiders provided a little more of a reward for drafting green.

In Fifth Dawn, Kibler first picked Guardian Idol over Stasis Cocoon. The heralded Loxodon Anchorite came second, and the rest of Fifth Dawn provided mana fixers in Sylvok Explorer and Dawn's Awakening. In addition, he took some Sunburst cards to abuse them with in Sawtooth Thresher and Lunar Avenger. Two late Condescends provided another splash option as well.

Kibler: I don't even know if my deck is good. I haven't actually drafted Sunburst enough to really be familiar with how it works. And, well, that's what I drafted this time. My goal was to draft white, because white is pretty much the most powerful color overall.

TW: Is that because of Fifth Dawn?

Kibler: I was a big fan of white even before Fifth Dawn, but I think the white cards in the set are incredibly powerful. Like, Loxodon Anchorite, you can just dominate boards with that. I drafted white-green yesterday too, this one is more like white-green-x. This one is far less of my typical white-green deck that I normally draft. It's a lot more Sunburst based. Well, it's not exactly Sunburst based, but it has a lot of Sunburst cards that I'm trying to figure out. I think that overall, my deck seems good. It doesn't seem incredibly powerful, but it has mana acceleration, large creatures and I can potentially play some very powerful Sunburst cards.

TW: What are the Sunburst things you got exactly?

Kibler: I have Sawtooth Thresher, which is okay. Lunar Avenger seems pretty amazing to me. I mean, if you can Sunburst for five it's a 7/7 for seven that can gain abilities. The first off-color card I took was Dismantle, and its stock goes up incredibly with Fifth Dawn because you can use it with all kinds of Sunburst stuff. Your creatures become gigantic. Another card that I took fairly early was Guardian Idol.

TW: Yeah, I was actually wondering about that.

Kibler: I was considering taking a second Guardian Idol over Loxodon Anchorite. The Idol seems to me along the lines of the Myrs, which are really important in the format. It's less mana efficient early on in terms of attacking, but it's a larger body later. It's also not as easy to kill as a Myr. But, Loxodon Anchorite is just amazing. Overall, I think my deck is pretty solid. I opened my draft as well as I'd like with Arrest, Arrest. I'd rather get two Blinding Beams, but you deal with what you can.

TW: Why take the Talisman third?

Kibler: I think the Talisman is just better than the other cards in the pack.

TW: Even better than Enforcer?

Kibler: Well, in a green based deck or a white based deck, Enforcer is not even a card you want in your deck. I'd cut Enforcer from this deck if I had it, and the Talisman is a very important card. My first two picks were white cards, and Enforcer is not going to be good in a white based deck. Goblin Replica, while it's a good card, in terms of its importance in the format, I don't think it's as important as having mana acceleration. As it turns out, I ended up with a lot of mana acceleration, which I think is good, actually. I have a lot of high end cards like Tangle Spiders, and playing stuff like that early can be really powerful.

TW: You took Predator's Strike fourth, and there were two other white cards in the pack.

Kibler: Raise the Alarm was the other card I was considering, and there was also Soldier Replica.

TW: Did you figure "I'm going to go into green right now", instead of sticking with one color and seeing what comes?

Kibler: I could have taken the Raise the Alarm and I seriously considered it. That was one of the more difficult packs in the draft. I just think that Predator's Strike is strong enough that it's worth taking there and sacrificing a Raise the Alarm even if I don't end up playing green. The other cards that came through me in pack one were black cards, things that don't have good synergy with the other white cards I drafted. I don't like having Irradiates in a white deck because you never have enough artifacts. So I think the way things turned out, Predator's Strike turned out to be the right pick.

TW: I'm guessing that Wurmskin Forger is a lot better with Sunburst.

Kibler: I think Wurmskin Forger is just really good, period. Its ability contributes to a lot of the Sunburst cards that can remove counters for effects, but also I think it's a great card as a game breaker. You can power up a Tangle Spider who suddenly becomes 6/7. He's hard enough for any deck to deal with. There's not that much removal that can kill large, non-artifact creatures in the format. That's one reason why you have say, Zvi's obsession with Leonin Bola. It's so powerful because it can stop creatures that you'd otherwise be unable to deal with.

TW: Why were you shaking your head at Relic Bane coming around so late?

Kibler: I think Relic Bane is one of the most powerful cards in the first set. I rank it just behind Barter in Blood, Betrayal of Flesh and Terror, cards of that nature. I think it's the most underrated black card, maybe even the most underrated card in all of Mirrodin.

Kibler: Tel-Jilad Wolf. In retrospect I would have rather had the Darksteel Ingot, which was the other card I was considering. It was a horrible pack and green-white is not very good in Darksteel, clearly. But yeah, at the time I had three creatures. One of the most important things in Limited in general is filling out your curve, and there aren't many good three casting cost creatures, period. So, I picked the Wolf. I'd rather have the Ingot at this point, but the Wolf isn't as bad as most people seem to think.

TW: You weren't actually thinking about taking Pulse of the Forge, were you?

Kibler: No. I was just not thrilled with the fact that I was passing it.

TW: You've got to be pretty happy with Fangren Firstborn fifth pick.

Kibler: That was amazing. I couldn't really ask for much more than that. I don't think my Condescends are going to make the cut. It's possible that I can splash them, and against slower decks I can potentially board them in as well.

TW: Eater of Days over Viridian Acolyte- I'm guessing that the Acolyte wouldn't have made the cut anyway.

Kibler: I actually think that Eater of Days can be really powerful in certain situations. I don't want to have an Acolyte in my deck. You've got enough mana fixing in green between Explorer and Dawn's Reflection, which is amazing. It's really, really powerful, especially if you have multiple Sunburst cards. I just don't want an Acolyte in my deck, and Eater of Days is something that can make your deck, particularly if your deck isn't all that good. You can play Eater of Days and just win with it. Or, if you play against a black deck, it's ridiculous. They can't remove it, so you just play it and win.

Kibler: If I play against a mono-black deck I'll certainly side it in.

TW: I take it you don't like Stasis Cocoon too much?

Kibler: I don't think it's that amazing anymore. A lot of artifacts it doesn't do anything to, like say if they've already equipped something. There's actually less artifact creatures now that are all that exciting except for Sunburst, and most decks can't use those as well. Now there are more real creatures, so there's a lot of cases where Stasis Cocoon just sits in your hand. At the time, I only had the Talisman for mana acceleration. Given the high end of my deck, and the high end of Fifth Dawn in general, I decided I would much rather have mana acceleration.

Kibler: As I said, I don't really know how good it is. I have a good creature base, acceleration and good spells. I don't expect to go worse than 2-1, and I could see myself going 3-0. Who knows.