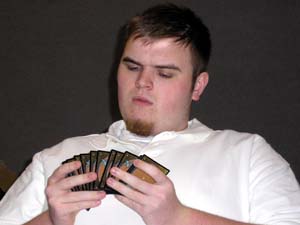 Fifth Dawn Limited format is a newborn, but players are rapidly developing draft strategies to force, in order to achieve optimal forty-card decks. Many of the TOGIT team feel that forcing B/R is the way to go, as the quality of removal in those decks tends to be such that you can win even with mediocre men. On the other side of the coin, a few players are starting to recognize something else: Sunburst is underdrafted right now. Gabe Walls is one such player, so we chose to follow his second draft of U.S. Nationals and see exactly how he was executing this new strategy.

Gabe: "I knew going into the draft that my daddy was drafting B/U no matter what, so I basically had three colors to choose from. I got some very good G/W cards early and passed some huge Red bombs.

I passed Echoing Ruin in Pack 2, thinking there was absolutely no way I could go into Red after passing Shrapnel Blast, Electrostatic Bolt, and Pyrite Spellbomb in pack 1. Then I got passed Dismantle and Vulshok War Boar, and didn't understand what was going on, but dipped into Red at that point, and was rewarded in pack 3 with two Vulshok Sorcerers.

Sunburst is insane by the way. It's the best deck in the format if you can draft it, because you get to underpay for cards that are mini-bombs. Unfortunately I ran into some problems later in the draft because I had no creatures, and needed to give up some card power in exchange for warm bodies. I still only have thirteen right now, but I think my deck is at least solid. I have five removal spells, and I got a ridiculous seventh pick Engineered Explosives, which should never, ever happen. Thankfully it did, and I was more than happy to plop it into my pile.

If you look at pack 3 it looks a little strange, but Healer's Headdress is really good. If you have one of those, a couple men, and two or four White open, your opponent just can't kill your guys. It's pretty underrated right now, but I love 'em.

Predictions: 2 -1. No way around it. I'll lose to somebody with a better deck, and will beat two people who are either bad or can't handle the power of my deck."

These are the key choices that Gabe looked at while drafting. The cards he actually picked are in bold.

Pack 7: Darksteel Ingot and nothing