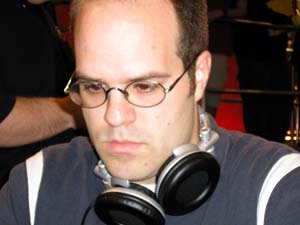 Long, one of the oldest and most famous Magic pros on the planet, had to qualify through California Regionals to make it to Nats this year. Since U.S. Nationals is always one of his best events, slogging through the necessary rounds to make it to the big event seemed an obvious choice to him. Gadiel Szleifer, on the other hand, is a fifteen-year-old pro from the Chicago area who finished in the money at New Orleans and Seattle, and is the producer of some mildly vitriolic tournament reports published on the Internet. Considering Long's charisma and Gadiel's reputation as a champion trash talker, it seemed like an obvious choice to kick off the Championship.

Mike had obviously never heard of Gadiel before and was a bit confused about the choice of covering this feature match, as this exchange took place while the players were shuffling.

Mike: Don't mess around with me... what are you good finishes?
Gadiel: I got nothin'.
M: Pro Tour Top 8s? Grand Prix Top 8s? I don't know these things anymore.
Gadiel: Yeah dude, FNM top 8s.
Mike: How'd you qualify?
Gadiel: Rating.
Mike: Really? Those FNMs add up after a while.

Mike started the match by shilling for his website, and the players were off.

Gadiel won the die roll and chose to play. Mike took a moment to think about his first seven before tossing them back for another six. Long bantered while doing this, as Gadiel sent back mostly mono-syllabic responses, not giving Long much of an opening

Gadiel: That's seven cards.
Mike puts a face down card back on top of his library.
Gadiel: Five?
Mike: No, this one's six.
Gadiel: No no, I'm asking if you want to go to five.
Mike: Uh no.

Gadiel kicked things off with an Arcbound Worker, and followed up with an Arcbound Ravager and a Welding Jar. The Ravager met an Electrostatic Bolt with the Jar on the stack, and tossed his counters to his fellow proletariat.

Long played Pyroclasm and cycled a Slice and Dice to keep Gadiel's army down, then cast another Clasm to get rid of a Frogmite, but he continued to take three a swing from a pumped up Worker. Gadiel finally found a Vault of Whispers and put a Disciple of the Vault into play. Arc-Slogger came down on Long's side of the board and quickly dispatched the meddlesome Cleric.

Long's life was dropping into dangerous territory before Furnace Dragon was windmilled onto the board, as Gadiel simply shrugged and said "okay." He recovered quickly, laying two lands and then another Arcbound Ravager. Long followed up with a Damping Matrix, and the battle became a matter of a few attack steps before the first game was dispatched in favor of the man many consider to be Magic's greatest villain.

The players were quiet as they shuffled up for the next game. Since Long seemed to be playing a pure hate deck for Affinity (maindeck Damping Matrix, Electrostatic Bolts, and Furnace Dragons), he obviously must have been pleased by the first round pairing. Talk before the tournament was that maindeck Furnace Dragons were overkill, but apparently Mike had chosen to disregard the memo.

Both players kept their hands for game 2. Long kicked things off by Oxidizing Gadiel's Vault of Whispers, and when the fifteen-year-old didn't have a second land on turn 2, he gave a small pump of the fist. Glimmervoid hit the board on turn 3 for Gadiel, along with a Disciple of the Vault and the lament, "Slice and Dice me." 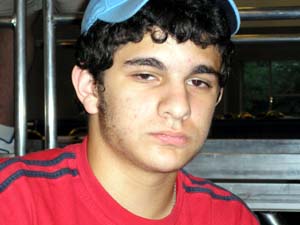 A Damping Matrix for Long, and a Thoughtcast for Gadiel slowed things down a bit, as Long mostly played Darksteel Ingots, building up to Furnace Dragon mana plus affinity, while Gadiel tried to get enough pressure on the board to make any Dragons irrelevant. Another Thoughtcast refilled Gadiel's hands with seven cards including a Mana Leak. Arc-Slogger on Long's side stopped the 1/1 creatures from beating him down. Then back to back Bolts on Disciple and Myr Enforcer brought Gadiel's team down to a mere Arcbound Worker, as Mike paused for a moment before Bolting the Worker and Oxidizing a Seat of the Synod, giving him a four removal spell turn, decimating the Affinity player's board.

A second Arc-Slogger met a Mana Leak from Gadiel, but that was merely a precursor for a Furnace Dragon that ended any hope Gadiel had of a victory.