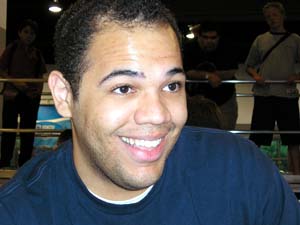 were some rumblings that Seth was particularly scared of the CMU Elf and Nail deck, and he expressed this as soon as he got to the feature match table.

Seth- "My deck is terrible against you."
Osyp- "I love how Goblin decks now have seven or eight casting cost stuff like Insurrection and when you ask, 'How are you going to cast all that?' the answer is always Skirk Prospector."
Seth- "That's my answer."

Seth opened with a Goblin Sledder, and Osyp played Birds of Paradise. It died to a cycled Gempalm Incinerator, and the Sledder attacked for a point of damage. Osyp came right back with another Birds and Wirewood Symbiote, and Seth played Sparksmith.

Seth- "Agent Smith."
Osyp- "Agent Smith? I love it when people name their cards after stupid movies. What should I call this one (Viridian Shaman)? The Stepford Wife?"

It blew up a Great Furnace, and the Sparksmith shot down a Birds, before being joined by a Piledriver. Osyp played a Wood Elf, along with another Birds. The Sparksmith kept shooting them down, and Seth was stuck at two lands and not in much of a position to mount a full assault. He played a Prospector and sacrificed it along with the Sparksmith to bring out a Warchief, and attacked for five. This still wasn't a tremendous amount of pressure, and Osyp got to work with a Skullclamp and Vernal Bloom. He played a second Bloom and cycled through Wood Elves, but could only muster a Shaman as a desperation blocker, blowing up his own Skullclamp. Seth had Siege-Gang Commander, and won easily from this point.

Osyp took a mulligan, and after a bit of thought Seth decided to take one as well. Osyp had a Skullclamp, followed by Vine Trellis. Seth dropped a Piledriver, and Osyp played Vernal Bloom.

Seth- "Why didn't I splash green for Naturalize? Because someone called me a sissy. No one calls me a sissy."

Seth played a Sharpshooter and said go, and all Osyp could do was put Skullclamp on the Trellis and end his turn. Clickslither joined the team, and attacked along with the Piledriver. The Trellis went down to the 3/3 and gave Osyp some cards, as the Sharpshooter got an extra point in. Osyp played Wood Elves, and played Duplicant to take care of the Clickslither. Seth had another and sent it in for an attack on his next turn, and the Duplicant blocked the Piledriver to trade. Osyp untapped and cast Tooth and Nail with entwine, getting two Triskellions. One went into play, along with a Darksteel Colossus that had been in Osyp's hand. The Triskellion took care of the Sharpshooter, and took the Skullclamp. Seth played Siege-Gang Commander, and ended his turn. Osyp attacked with his creatures and a Goblin token chumped the Triskellion, while the Colossus dealt eleven. Pyroclasm cleared away the Goblins, and Seth conceded a turn later. 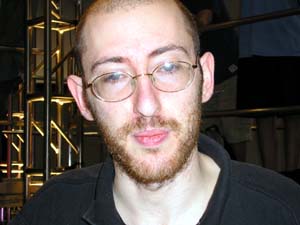 Seth (looking at his first seven)- "If you can win despite this hand, your deck is phenomenal."
Osyp- "I hate it when people say that."
Seth- "Let me just pump the fist at your mulligan, I forgot to do that."

Osyp drew and looked disappointed before bursting into absurdly hysterical laughter. He turned to Randy Buehler with ridiculous excitement, shouting "I thought I didn't draw it! I didn't look at my hand!" He played the Triskellion he was apparently looking for, and shot down the Prospector. Seth played a Clickslither and attacked with his team, and Osyp lost the Triskellion as a chump blocker. Tooth and Nail gave Osyp a Colossus, and a Duplicant that took out the Clickslither. This was enough to give him the game and the match.

Osyp- 2 Seth- 1
After the match, Seth admitted that he wasn't as scared of the match-up as he had been letting on, and Osyp agreed that it's pretty much even.