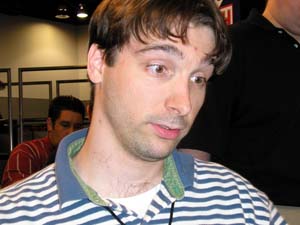 Berkowitz and Tom Guevin are two of the more "colorful" players on the Pro Tour currently. They were once teammates as part of the YMG conglomerate, but it seems that relationship is at least temporarily over.

As the players shuffled they compared their tales of woe that had brought both of them to a 1-1 record. Berkowitz shook his head, saying, "I mulliganed to four in Game 3 and still almost won." Guevin responded in his usual style. "Was he a good player though? My opponent was certainly not."

Tom started talking to himself as he tried to figure out Berk's deck: "You asked me for Seething Songs, so it's either Big Red or Affinity." In the end he guessed Big Red, the mono-Red control deck that's been doing well in Mirrodin Block Constructed.

Berkowitz went to cut Tom's deck, but he paused when he saw Tom starting to pile shuffle. "Gonna shuffle me, Tom? You don't trust me?" Tom looked up and said, "You want the truth, or do you want me to lie? Because I'm pretty good at lying." Berkowitz shrugged and Tom added, "I don't trust anybody. That's the definition of paranoia."

Once the players were ready, Jordan opened with Seat of the Synod and Worker. "Big Red," he said jokingly as he passed the turn.
"That's not very big and it's not very red," Tom said as he placed down a Forest and a Birds of Paradise. Jordan could only add a Skullclamp and nudge the turn without a land. Tom sacrificed a Wooded Foothills for a Mountain, falling to eighteen. He then placed down a Viridian Shaman and chose to remove the Skullclamp instead of his opponent's only land. Jordan found Vault of Whispers and tapped both for Thoughtcast, then played Welding Jar a turn too late.

Shaman swung in to reduce Jordan to eighteen. Tom played Wirewood Symbiote and returned Viridian Shaman, untapping his Birds. He then replayed the Shaman and took out the Jar. Jordan played out another Thoughtcast and could only play another Welding Jar. No land. "Story of my life," he said, looking miserable.

Tom played a Forest and Vernal Bloom, then returned and replayed Viridian Shaman to smash the new Jar. Berkowitz played out Glimmervoid and tapped both of his Black sources for Disciple of the Vault. Tom nodded.

Jordan looked across at his opponent's board and mumbled, "This turn's gonna be a good one for you." With Symbiote and Birds, Tom had access to eleven total mana, a magic number in a deck running Darksteel Colossus. Sure enough, an 11/11 arrived on the table. Jordan could only play out a Skullclamp and sacrifice his Worker, dropping Tom to sixteen. He then played out a fourth land and a second Clamp and was done.

Eventually he decided the card actually didn't help him. He swung in with Symbiote and Colossus. Jordan took the whole thing and fell to two. Tom decided his best play was to put pressure on Jordan's mana, so he used his Shaman to destroy two lands, falling to twelve and reducing Jordan to just a pair of lands in play.

Jordan drew and considered. He played Vault of Whispers and then a potentially devastating Arcbound Ravager. With five artifacts in play, he only needed one more to deal lethal damage through his Disciples. He didn't have it.

He started sacrificing artifacts, but gave up halfway through and conceded the game. This was a mistake, as he missed the fact that he had a minute chance to win. If he sacrificed all his lands and one Clamp, then put the other Clamp on his Ravager and had it eat itself, he could have drawn double Welding Jar for the final four points.

There was more banter as they shuffled up for Game 2, but it only led to Jordan shaking his head and saying, "You're talking nonsense." Tom didn't stop for a second. "That's my whole life. Insanity and nonsense. Sorry, not insanity. Paranoia and nonsense." Jordan chuckled, "You got it right the first time."

Jordan led with Great Furnace and a Clamp. Tom matched with Forest and Birds. Jordan played a second Furnace then Clamped a Worker for two cards. Tom sacrificed a Wooded Foothills for Forest then summoned a Fierce Empath that fetched Triskelion. Berkowitz played a third Furnace, then a free Frogmite that was double Clamped. Another Frogmite jumped out to take its place.

Tom played out Wirewood Herald and Wirewood Symbiote along with a third Forest. Jordan double clamped the fresh Frogmite and drew another four. Seat of the Synod hit play; Citadel, Clamp, Seat, and Thoughtcast hit the bin.

"You must have the Mana Leak if you're discarding Skullclamps." - Tom

The Elf team hit the Red Zone. Fierce Empath jumped in and out of play and searched up another Triskelion, which then hit the graveyard due to Berkowitz's Mana Leak. Jordan drew two off Thoughtcast, added a land, Myr Enforcer and Disciple of the Vault, then passed the turn with two red mana and the Sphere available.

Tom tried another Trike and Jordan asked him to pause, but then let it resolve. It shot down the Disciple. Jordan cycled through the Sphere, then let the Disciple die. At the end of the phase Jordan sent a Skullclamp at Tom's head with Shrapnel Blast, taking him to twelve. If he had done it immediately he would have gotten an extra point out of his Disciple, but as it turned out it didn't matter. He untapped and played a fresh Disciple, then immediately sent another Shrapnel Blast at Tom. In response Tom poked the Disciple, but in response to that Jordan used a third and final Blast for a total of twelve damage and the game.

Tom, who was now thinking Berkowitz had somehow stolen the YMG Affinity decklist, looked up at Paul Rietzl in the crowd:

They were mostly silent before the final game, except for a musing from Tom, "So who do you think they were referring to with the unsporting conduct announcement this morning, you or me?" At the beginning of the day, Head Judge Mike Guptil had announced that the judges would not be tolerating any unsportsmanlike behavior. 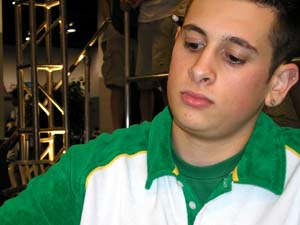 Tom shipped his hand back for a new six, but found only one Forest. Down to five he went. He started with Forest and Birds, and had Vine Trellis the next turn, which seemed like an auspicious start. Unfortunately he spent the next five or six turns drawing nothing but lands and mana producers. Berkowitz developed his board, drawing cards with Clamp and eventually finding two Disciples. Two Shrapnel Blasts finished the match.

Tom, with an unclear level of sarcasm, looked up and said, "You're the better player, you deserved to win." In response to questioning looks he added, "I'm just being a good sport about it."