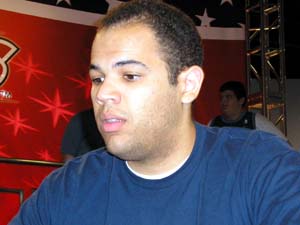 : "My deck is SO bad. I'm almost embarrassed to bring it to the table. This match, however, should be very interesting."

Osyp: "Judge, my opponent isn't here."
Judge: "Is he in an interview?"
Osyp: "No, I think he said he was, uh, going to drop or something. He said he had food poisoning, maybe. Unfortunately, I need him to be so late that he misses enough time so that I win both games. Otherwise my deck isn't going to cut it."

Mike arrived about four minutes late, sat in his seat, and was promptly informed he received a game 1 loss.

When asked after the match what happened, he said he was talking to Matt Place in the hallway, and had lost track of time.

Mike: "I hope that we both make it to the finals, because I think it would be a lot of fun to play with you on the U.S. National Team."

Mike kicked things off with a Leonin Squire, and a Vulshok Sorcerer, which pinged an Arcbound Stinger out of the sky. Osyp followed up with a Tel-Jilad Wolf and a Skyhunter Prowler. Both players played extremely quickly, as Long laid a Vulshok Morningstar and an Auriok Windwaker, which he referred to as "a sucky 2/3 flier."

A battle ensued over the life or death of a Leonin Squire and Osyp's Wolf, which eventually ended with the Squire gaining a Morningstar and the Wolf getting a dose of Echoing Courage before damage was put on the stack, before the Squire was saved with a Stand Firm. Long then made a huge mistake by moving his Morningstar to his Windwaker, resulting in the death of the Squire, as it became a 3/3 with four damage on it.

It proved not to matter though, as a Loxodon Mystic from Long and continued beats from the 4/5 flier plus a little help from Stir the Pride finished the job.

Mike: "I'm trying to keep my game losses to once per match here… makes it a little easier to win that way." 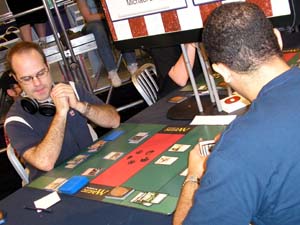 Osyp started off with a Leaden Myr, and Mike had to ask a judge for a ruling about Stasis Cocoon before Cocooning the Myr. Osyp simply shrugged and followed up with a turn 3 Razor Golem.

"Might have been a liiittle bit better if I saved that Cocoon, eh?"

Long followed his "mistake" with a double striking Skyhunter Skirmisher, while Osyp dropped a Loxodon Anchorite onto the board. Long swung with the Skirmisher, and then cast a Vulshok Berserker for defense.

Arcbound Hybrid joined the fray on Osyp's side, as he debated exactly how many creatures to send across the red zone. He eventually chose to only send the Hybrid, forcing Mike to either take the damage or increase the size of his Razor Golem. Long took the beats and dropped to twelve.

Mike took another swing from a lonely Hybrid before trying to even the board situation with a Loxodon Mystic.

Osyp used his hand to count the damage he could do when Mike quipped, "What's that? Concede? It looks hopeless for you? I agree, you know, you should definitely just concede to me."

"No, I'm just pondering the fastest way to kill you," said Osyp.

Razor Golem, an Arcbound Stinger, and Arcbound Hybrid all entered the fray this time. By the time damage was done, Osyp had a 6/7 Razor Golem, Long had lost a Berserker, and a very hefty Tangle Golem plopped himself firmly in Mike's way.

Osyp attacked again, tapping down the Razor Golem with a Mystic. The Skyhunter Skirmisher got a Stand Firm and traded with a Tangle Golem... Except Mike Long didn't place the Skirmisher in the graveyard. Osyp passed the turn, play was stopped during Mike's turn, and a judge was called over by Randy Buehler. Long then received a Procedural Error - Major, which resulted in a warning. The Skirmisher was then placed in Long's graveyard and play continued. 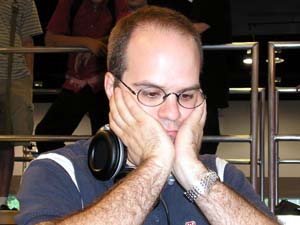 Long took six from a Razor Golem, Retaliated, and Osyp merely regenerated the Golem and placed his Pteron Ghost in the graveyard, dropping Mike to one. The next attack sealed the deal, as all Mike could do was play a second Loxodon Mystic and pass the turn.

Both players chose to play the last game for fun to see what would have happened if Mike hadn't gotten a game loss. Mike won in a very close game, but at that point it didn't matter, since a 2-1 win for Osyp was already on the books.