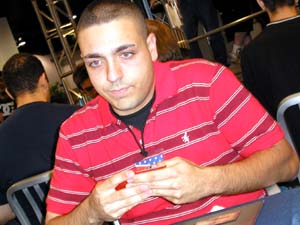 there's something left of last year's Your Move Games/CMU rivalry, this is a good match to represent it. Although Fabiano doesn't have Gary's impressive resume, he's been a constant force on the Pro Tour and Grand Prix circuits during the last few years, collecting solid finishes along the way. He even has a Sunday Team Pro Tour appearance to his credit.

Fabiano -"Is your deck any good? Mine has six rares. You'd better win quick, they all say 'I win.'"

After talking about Gary's chances, the discussion turned to his interview with Playboy at the Invitational last month.

Gary- "Well my girlfriend was following the coverage, and she was like 'So what were you up to?'"

Gary played Soldier Replica and Pteron Ghost on turn three thanks to Vedalken Engineer, and Fabiano was stuck at two lands. He played a Darksteel Pendant, and Gary cast Serum Visions. This was followed by Frogmite, and Gary attacked with his creatures.

Fabiano- "Your deck is terrible."

Raise the Alarm on end step put more pressure on the table, and despite finding a third land, Fabiano still had nothing to fight back with. He took another six damage, and Gary played Thermal Navigator along with Thought Courier.

Fabiano- "If you show me a spell, I'll concede."
Gary- "Are you serious?" (shows Psychic Overload)

This time things started off a little better for Fabiano, as he accelerated out Viridian Lorebearers with Sylviok Explorer. Gary played a Talisman and Razor Golem off a third turn Engineer, and Fabiano attacked for three with the Lorebearers. Fabiano said go after the attack, sitting back on five mana. His Explorer took down the Golem with the help of Predator's Strike, and Gary rebuilt a bit with Skyhunter Skirmisher. The Lorebearers got through for three more damage, and Fabiano played Wizard Replica. Gary came back with Neurok Prodigy and Soldier Replica, keeping his creatures back on defense. Fabiano busted out Plated Slagwurm, and ended his turn without attacking to Gary's surprise. Purge killed the Replica, and Gary's fliers dealt four damage. The Slagwurm was chump blocked by the Engineer, and Fabiano summoned Tel-Jilad Wolf. The fliers brought him down to eleven, and Arrest took care of the Lorebearers. Still, Fabiano cast Barbed Lightning to remove Gary's only blocker, and attacked for the win.

Fabiano played a first turn Viridian Acolyte, and charged in for an attack, all but begging out loud for Gary to wreck him with Raise the Alarm. Of course he had it, and Fabiano shrugged it off as he played Sylvok Explorer. Gary played a second turn Talisman, and played a third turn Skirmisher as he missed his third land drop. Fabiano played Dawn's Reflection, and brought out Ensouled Scimitar. Gary couldn't draw another land, so the best he could do was play Thermal Navigator. Fabiano kept building with Wizard Replica, but his draw wasn't aggressive enough to start attacking and punish Gary for his slow start. The third land showed up, and Gary got back into the game with Vedalken Engineer and Pteron Ghost. Fabiano just played another Explorer and said go, while Gary played Drill-Skimmer. 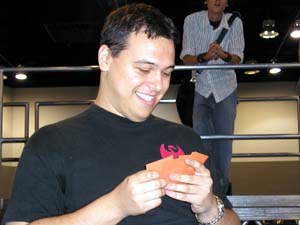 The stalemate continued, as both players even drew and ended their turns while playing nothing for a period of time. Fabiano looked to shake things up with Mindslaver, and Gary had Condescend for five. Fabiano seemed a bit puzzled, as he realized he could pay five and have his Mindslaver resolve. He asked Gary if he knew that he could pay, and Gary just shrugged. He then asked a judge if Gary's Engineer could pay the two if Wizard Replica countered the Condescend, and that wasn't the case. This gave Fabiano the mana necessary to activate the Mindslaver right away. He took control of Gary's turn, where he saw Arrest, Psychic Overload and Soldier Replica in hand. The Ghost was sacrificed and headed to the graveyard, and all of Gary's artifacts were sacrificed to the Navigator. Soldier Replica was sacrificed to kill an attacking Skirmisher, and Arrest went on the Engineer.

Gary- "That was a winner. I didn't play that turn well at all! Don't worry, I've still got a Soldier token."