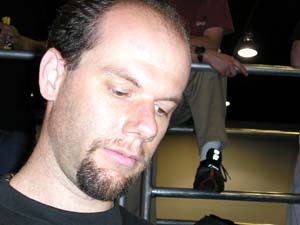 a major theme of this tournament is the emergence of the new generation of American Magic players, this match is a great example of the old guard against the new. Mitch Tamblyn has been on a roll lately, coming in the Top 16 of Pro Tour San Diego, and Top 8 at Grand Prix Oakland. His opponent, Dave Humpherys, needs no introduction. Worlds, Pro Tours, Team Pro Tours, Grand Prix tournaments- you name it, he's put up top finishes there. He has yet to be on a National team however, and is looking to change that this weekend. Both players came into this round with perfect 5-0 records, and are on their way to securing a seat for Sunday.

Tamblyn mulliganed down to six. He had a second turn Leonin Skyhunter, and Humpherys played Vedalken Engineer. The Skyhunter attacked for two, and Night's Whisper provided some more cards. Grafted Wargear made Humpherys' Engineer a solid beater, and Tamblyn increased the pressure with Arcbound Hybrid. Humpherys played Talon of Pain and dealt four more with his Engineer. Tamblyn attacked for four again with his team, and used Stasis Cocoon to deal with the Talon. Thought Courier gave Humpherys a little more card economy, but the game was all about tempo and racing at this point. Tamblyn played a Razor Golem, and just attacked with his Skyhunter. Shatter destroyed his Golem, and Humpherys activated his Courier. The Engineer wasn't blocked, and Baton of Courage provided the final points to push through lethal damage. 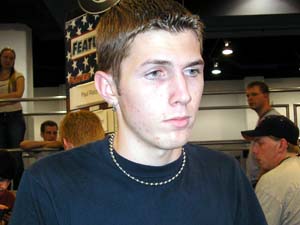 Tamblyn played Lightning Greaves, and once more Humpherys had a second turn Engineer. Suntouched Myr gave Tamblyn a 2/2 body, and it attacked right away thanks to the Greaves. Echoing Ruin destroyed the equipment, and Humpherys played Grafted Wargear. Tamblyn played Razor Golem, and attacked for two with the Myr. Humpherys played Auriok Siege Sled, and made it into an absolute monster thanks to the Wargear. All Tamblyn could do was play Silver Myr along with Leonin Squire, and end his turn. The Myr and Golem were forced to jump in front of the Sled and die, and Humpherys added a Goblin Brawler to his side. Tamblyn summoned Leonin Battlemage, and the Myr was next to die to the Sled. Talon of Pain made things look even better for Humpherys, and Tamblyn's Squire got through for three. Icy Manipulator followed, and now Tamblyn had a much needed answer to Humpherys' Sled. The Squire got through for three more, and Tamblyn made things look even better with a Leonin Skyhunter. Things shifted right back, when Humpherys cast Shatter on end step. This freed up his Siege Sled, and it got through for six damage. Sundering Titan followed, and Tamblyn couldn't recover.