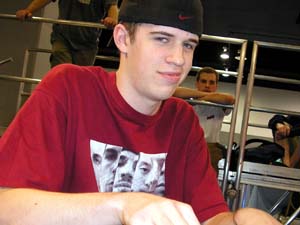 Thompson sat down for the match with a comfortable 3-1-1 record. His opponent, Paul Rietzl, just won the North American Challenge last weekend and took home $2500. He was coming into this match at 3-2.

Gerry won the right to play first, good lucks were exchanged, and the game got underway. Gerry led Iron Myr while Paul matched it with Vedalken Engineer. Gerry could only swing for one with his Myr and add an Arcbound Stinger.

Rietzl made an Elf Replica and a second Vedalken Engineer, threatening something large on his next turn. However, his first play was just a Talisman of Unity.

"That was a pretty high pick." - Gerry
"No kidding. It was over two Myr, a Terror and a Deconstruct. Talismans are awesome. I really think Talisman's the pick there." - Paul

He then attacked with Elf Replica and played out a Drill-Skimmer and Leonin Squire, recovering his Spellbomb. Gerry just hit for one and ended his turn with six mana available. Paul ticked off the cards he knew were in his opponent's deck:

"Tangle Spider, Grab the Reins, Stand Together, Pulse of the Fields?" "Yeah, all of the above. You're too good."

Leonin Squire, Engineer, Replica, and Drill-Skimmer entered the Red Zone. Gerry did indeed have the Tangle Spider and it jumped in front of Drill-Skimmer. Gerry took five and fell to thirteen. Rietzl passed the turn with two cards.

Mirrodin's Core enabled a 5/5 Sawtooth Thresher for Thompson, then Spider and Stinger attacked Paul to thirteen. Rietzl just played out Neurok Prodigy and a land and ended his turn. Gerry happily pushed his men into the Red Zone.

"I think you enjoyed that a little too much." - Paul

He double blocked Tangle Spider with a pair of 2/2s. Baton of Courage came down and crushed both his team and his hopes of winning the game.

He drew his card for the turn and packed it up.

Paul had been talking about his sideboard plan with everyone except Gerry since before the round even began. The card he wanted to bring in? Vex. He did indeed, as Elf Replica and one of his three Vedalken Engineers hit the bench for Stand Firm and Vex.

He leaned over to Andy Hall at the next table, saying, "Did you see what I'm sideboarding in?" Andy leaned over to read the card and shook his head, "What are you doing?" Paul simply grinned and responded, "Just throwing away my Magic career."

As they shuffled they chatted about the draft. "The packs just seemed mediocre," Gerry said. Paul agreed. "You know what my first pick was right? Soldier Replica. It was Soldier Replica, Pearl Shard, or Predator's Strike." He checked his seven cards and nodded, adding, "I have a good draw, I'll keep."

Turn two Arcbound Slith hit the table. "Could have a turn two win here, if you don't have anything. Come on nothing. No Myrs, no nothing."

Gerry played a second land and nudged the turn with Forest and Plains. "If you Raise the Alarm me I'm gonna be really unhappy. I know you have one in your deck."

He thought for a while but eventually decided to hold back and just play out a Sword of Light and Shadow. Gerry shrugged and when the end step passed without event, Paul started kicking himself for not attacking. The Sword fell to Echoing Ruin.

Slith got in for a point, safely this time, and Rietzl added Soldier Replica. Gerry played out the ridiculous healer: Loxodon Anchorite. He then chose to take the resulting attack and the Slith grew to 3/3. Rietzl shook his head ruefully, "Should be a 4/4, I'm just absolute stains. Can't believe I outthought myself."

Loxodon Anchorite returned the favor and Gerry played Tel-Jilad Archers to hold the fort. Paul could only make more mana producers: a second Engineer and a Darksteel Ingot. Anchorite fearlessly attacked again. Paul quickly shoved Engineer, Soldier Replica and Slith in front. "That was a very fast block, I just threw them in there. How was the play, was it good?" he asked. Gerry shrugged in response. "It was solid."

Before damage he put out a Baton for three, using all three counters to take down the Replica and Engineer and keep his Anchorite alive. Paul drew a card off a Spellbomb then played Squire and recycled it. "Not sure I have any outs to Tel-Jilad Archers. Like it might be better than my deck," he joked.

He sent it at the Anchorite, which prevented two to Gerry in response. The team rumbled across, but ran into another ambush in the form of Tangle Spider. Leonin Squire and Cobalt Golem both fell in combat. Paul's only consolation was that his Slith grew to 4/4.

Gerry sent his whole team and Rietzl fell to seven. Deconstruct on Arcbound Slith led to a 3/3 Etched Oracle. He ended his turn with a huge board advantage.

He managed to survive one more turn, but when Gerry went to enter his attack step on the next, he pleaded with him to cast a spell instead. 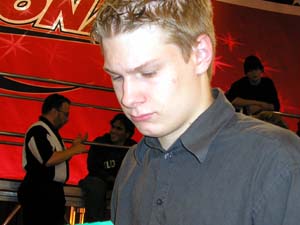 Paul slammed his card down. "Alright, Vex it."

A few laughs later, he conceded, shaking his head. "If I had just attacked with the Slith it would have been a very different game."