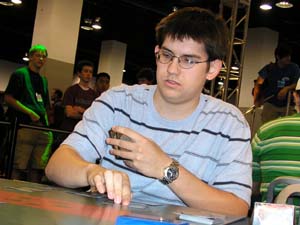 Swarowski was paired versus Mike Hall in a match that featured two of the three undefeated Limited players left in US Nationals. Patrick Sullivan, the only other undefeated Limited player, was paired versus Osyp Lebedowicz. Mike Hall flew in from Portland, Oregon without even being qualified for US Nationals. He took his Affinity deck all the way through the Grinder to qualify for the big event. Swaroski's most recent success came when he made Top 8 of Grand Prix Los Angeles. Both players went 1-2 in Constructed before their amazing 6-0 Limited performances placing them both at 7-2 overall.

Swarowski started off the first game with a turn 2 Vedalken Engineer. Hall laid down a Blind Creeper on his second turn. Swarowski didn't want to start taking 3 damage a turn so early in the match so he quickly dispatched the Blind Creeper with Echoing Decay. With the Engineer's mana he dropped out a Cathodion and passed the turn. With his third turn Hall only managed to play a Sylvok Explorer. Swarowski used the extra colored mana from his Engineer to play out an Infused Arrows with 3 counters. He removed 1 counter to kill the Explorer and then sent in his Cathodion for 3.

Hall continued to lay creatures with a Chittering Rats. Swarowski killed the Rats with the remaining 2 Arrow counters but because the Rats had denied him a draw step he was out of more creatures to play and could only swing with Cathodion and Vedalken Engineer. With the Infused Arrows finally empty Hall played Grimclaw Bats. Although Hall had to take the Cathodion damage one more time he appeared to have stabilized his board position. The following turn Hall attempted to kill the Cathodion with a Devour in Shadow but Swarowski saved the Cathodion with an Echoing Truth.

Hall's deck continued to provide as his next turn saw him cast the amazing Sword of Fire and Ice. He placed the Sword on the Grimclaw Bats, killed the Engineer with the Sword, and drew a card. With Swaroski already having used a lot of removal he sat helpless as the very angry Bat killed Swaroski in short order.

While the two players were shuffling for the second game Patrick Sullivan lost his match to Oysp Lebedowicz so winner of this match would be the US National Limited champion.

Swaroski opened up his original hand to find only one land and a Copper Myr; after some thought he decided to mulligan and then kept his 6-card hand. Once again Swarowski played a turn 2 Vedalken Engineer but this Engineer met with a Lose Hope. After Hall finished scrying he played out a Darksteel Pendant. Besides being down a card from the mulligan Swarowski's draw for game 2 appeared to be the same as game 1 when he played down a turn 3 Cathodion. During his upkeep Hall dug into his deck with the Darksteel Pendant to find a Forest. Satisfied with what he saw on top of his library he kept the card and flicked the Forest into play along with a Sylvok Explorer. 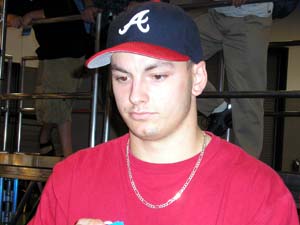 Swarowski attacked with the Cathodion and cast a Guardian Idol and Copper Myr. Hall cast a Dross Golem, which then traded with the Cathodion. Swarowski only had one card left in his hand when he played a Neurok Prodigy. Echoing Decay dispatched the Prodigy. Hall played a Nim Abomination and continued to develop his board position. With Swarowski having no cards in hand he looked to his deck for an answer to Hall's threats. Swarowski's deck would only provide him land, however. Hall killed the Guardian Idol with a Creeping Mold. Two turns later he showed Swarowski Ferocious Charge. Because the third Limited 6-0 lost this round as well, Mike Hall can start calling himself 2004 US National Limited Champion, the only player to run the format with an impressive 7-0 draft record!