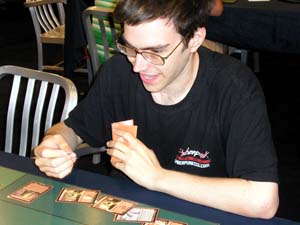 versus Big Red. Shvartsman versus Mowshowitz. Two old friends, Pro Tour teammates, playing two different strategies in an attempt to make the U.S. National team. Both players came into this round with two losses, so one more would put them precariously close to the edge of elimination. Shvartsman's success this weekend has surprised many observers, as he has been almost entirely focused on his business interests recently, reportedly at the expense of his play skills and deck testing.

Alex: "One of my employees built Zvi's deck. I could go into my bag for the decklist and be a scumbag, but I am not going to do that."

Zvi: "Can we draft instead? Shotgun on draft!"

A first turn Skullclamp, second turn Goblin Piledriver, and third turn Goblin Sharpshooter for Zvi put some early pressure on the board, but not enough to be too worrisome for the magicthegathering.com columnist. Fortunately for Zvi, Alex was completely Red screwed. He played back to back Damping Matrices on turns 3 and 4, nullifying Zvi's Sharpshooter action, and preventing Skullclamp from searching out more beats. Alex finally drew a Mountain and cast Seething Song into Rorix Bladewing, earning a "Woooow" from Zvi, as the race was on!

Another Song allowed Alex to cast a Pyroclasm, wiping Zvi's board before Alex cast a Solemn Simulacrum. Zvi finally found something a little more threatening in Siege-Gang Commander, but it too met a Pyroclasm from Alex, and two more Dragon swings finished the job.

Zvi sighed as he said, "I debated mulliganing there, but my draws didn't help out a bit. I figured I'd be able to dig a bit with Skullclamp."

Somebody from the very large crowd watching this match: "Zvi, you going to Worlds?"
Zvi "Yes. You think I'm going to let Alex stop me? That would be SO embarrassing."
Alex: "Heeeeeey!"

"Sledder go," was the cry from Zvi, as he looked to even the game. A first turn Wooded Foothills assured Alex had Red mana to cast a second turn Pyroclasm, shipping the Sledder and a Sparksmith to the land of the dead. Unfortunately for Zvi, he didn't make his third land drop on turn 3. "Come on deck, I need land and spells here. This is not an either/or problem."

Alex: "If you don't have land, this is reaally bad news for you. Molten Rain you."

Zvi: "What? Who does that? Yeah, take one, ya [removed to protect the guilty] (swinging with a fresh Goblin Sledder)! Kidding." 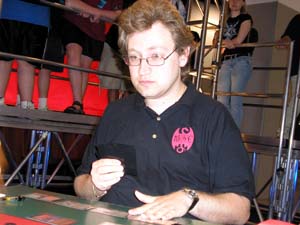 A cycled Gempalm Incinerator plus a Sparksmith zap got rid of one Avarax, but Alex had another in his hand of course that would find a friend on the next turn.

Zvi finally found a third land (again), and played a Goblin Warchief, leaving the Smith back to chump another Avarax on Alex's turn. It was to no avail though, as Zvi knew Alex had Pulse of the Forge in his hand to finish him off.

Alex: "It works. It worked a lot in testing that matchup, and you can see what it did here."

Zvi: "If I had had that third land drop on my turn 3, it would not have mattered."