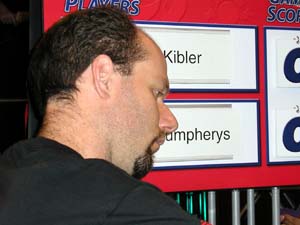 year, Brian Kibler tore up the swiss rounds of Nationals, only to fall to a bad matchup in the Quarterfinals of the Top 8. He's on track to play on Sunday again, coming into this round with a 9-2 record. Despite all his Top 8 finishes and tournament titles, Humpherys has never made an impact at Nationals, and this is his opportunity to do so.

With a win here, a Top 8 spot is likely for either player, although a loss won't put anyone out of contention.

Humpherys had a second turn Sparksmith, and Kibler cycled Eternal Dragon on end step. The Sparksmith attacked for one, and Humpherys played a Sledder- not the fastest start on turn three for a Goblin deck. Kibler cycled a second Dragon, and Humpherys mana burned for two on Kibler's end step. He untapped and played a Clickslither, dealing five total on the attack. This was enough to get Kibler to cast Wrath of God, and Humpherys came right back with Siege-Gang Commander. Kibler played nothing on his turn, so Humpherys decided to go for it. He played a Clickslither and attacked with everything, not sacrificing tokens to his Clickslither in order to not put all his eggs into one basket. Kibler cycled Gilded Light on end step, along with a Decree of Justice to make a Soldier token. He untapped and passed the turn, and on end step Humpherys started contemplating his play. After a while, Kibler just laughed and scooped his cards to save some time. 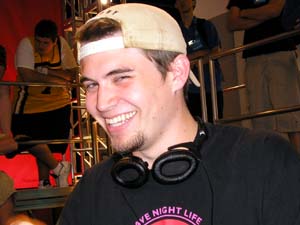 Humpherys mulliganed down to six. He started with a Prospector, and tried to equip it with Skullclamp, but Kibler had Oxidize. Kibler played Temple of the False God as his third land, which was not a good sign. Humpherys played a Warchief and attacked Kibler for three, and Kibler missed his next land drop. Humpherys brought out Siege-Gang Commander and attacked to bring Kibler down to eight, and the game ended soon after.