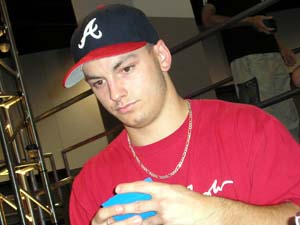 Hall made it into this tournament at the last possible chance: the midnight Constructed Grinder. Since then he's only posted a disappointing 2-3 in Constructed, but his perfect record in the draft rounds means that he has a good chance at Top 8. Alex Melnikow is an excellent player from Syracuse who's been on the Pro Tour for a while but hasn't yet had a high profile finish. He qualified for this tournament based on his rating.

"Today I knocked two of the people in my room out of contention," mused Alex as he shuffled. "I'll have to apologize to them." He didn't actually know his roommates before this weekend, as him and a friend showed up without any sort of arrangements for a hotel room. Luckily they found some fellow gamers who were willing to share.

Alex, like Elf and Nail players all around the world, started with Forest and Birds of Paradise. Mike matched him with Tree of Tales and a little beater, Arcbound Worker. Alex had a second Birds and Skullclamp, but no additional lands yet. He took one from the Worker and then watched as Thoughtcast and Frogmite resolved.

Alex found a Wooded Foothills waiting for him and immediately cracked it for a Forest. He used that mana for a Wirewood Herald and clamped it, drawing two cards first and then searching up a Viridian Shaman. He ended his turn with an untapped Birds, not wanting to trade in precious mana for additional cards.

Mike had another Thoughtcast and a Great Furnace. He Clamped his Frogmite and added Chromatic Sphere and Myr Enforcer. Frogmite and Arcbound Worker reduced Alex to fourteen life. Alex played a Forest and then Viridian Shaman with an interesting choice of targets. Skullclamp or Myr Enforcer?

He took down the Enforcer, buying himself as much time as possible. Mike then found a Glimmervoid and used it for Disciple of the Vault. Two Clamped creatures traded and both players drew some cards. Mike replaced his Frogmite and then ran through some Chromatic Spheres, eventually taking Alex to 10 with Disciple damage.

Melnikow tapped six for Triskelion and fired an arm at Disciple of the Vault, then another at the clamped Frogmite. Mike sacrificed a Welding Jar to save it. Alex then seemingly had a change of heart as he sent the last arm at the Arcbound Worker. The counter moved to the Frogmite.

Mike tapped one for a second Clamp and attached to the Frogmite. It rumbled in and traded with the Triskelion. Mike drew four cards and played out a Vault of Whispers. Maindeck Oxidize took down Alex's Clamp and Mike played out a third of his own. Alex could only muster a Forest followed by two Vernal Blooms and a Wood Elves. Lots of mana but next turn would show if he had the action to go with it.

Mike played out Tree of Tales and said done. Alex sent the Wood Elves in for a point, then tapped all six of his Forests and both Birds and targeted Mike with a Fireball for 19. Five lands dropped out of Mike's hand and onto the table. Only then did Alex finally crack a smile and say, "First time I've ever drawn that card."

As they shuffled they discussed Hall's deck choice of Affinity. He shook his head, complaining, "Why'd you have to play Elf and Nail?" He decided to keep his hand while Alex went back for six new ones.

Mike had Great Furnace and Arcbound Worker. Alex again had Forest and Birds of Paradise.

I don't think I've ever seen an Elf and Nail game that started without that opening.

In any case, Mike shot them out of the sky with Pyrite Spellbomb. Alex then sacrificed Wooded Foothills for a Forest and made a Wirewood Herald. Mike raised the stakes with Arcbound Ravager. He then added a Sphere and passed the turn.

Alex played a third Forest, went to tap it, then paused and joked, "Wish I knew what I was doing." He Oxidized the Ravager, then summoned Wirewood Symbiote and a Skullclamp to go with it. He shoved Herald in front when the 2/2 Worker attacked and searched up a Viridian Shaman. With Wirewood Symbiote in play, this was a potent threat.

Mike just made a Disciple of the Vault and said go with three mana showing. Alex tried Viridian Shaman. Mike funneled for Black through his Sphere and, in response, Terrored the Symbiote. He then added Thoughtcast and two Arcbound Workers, leaving him with only one in hand.

Alex brawled for three with the Clamped Shaman and brought in another to take out Seat of the Synod. Mike just replaced it and Alex shrugged. Both Shamans attacked again. Mike looked up suspiciously. "What'd you topdeck this time?" He took five.

Alex cleared the board and drew two for his troubles. Mike still couldn't get anything going, and Alex just ran the first half of Tooth and Nail, fetching Symbiote and Shaman. Mike could only play Great Furnace, shaking his head at his misfortune. Alex hit the Vault with Shaman, then made a Symbiote, then tried to remake the Shaman again but ran right into Mana Leak. He grimaced at his mistake; he should have killed the Seat instead. He tossed the Symbiote into the Clamp to try to salvage the situation. 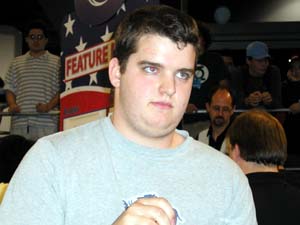 Mike drew and played Ravager, fidgeting with a towel much like the one carried by Gerard Fabiano. Alex found Wirewood Herald and sent it into the Clamp, getting his fourth Shaman to take out the Ravager. A few turns later he entwined Tooth and Nail for Triskelion and Darksteel Colossus.

Mike drew his card and looked up. "You're at ten?" He dropped double Shrapnel Blast on the table. Alex smiled and shook his head.

Alex: "I didn't think my deck was any good, so I added a Fireball, so I could win."