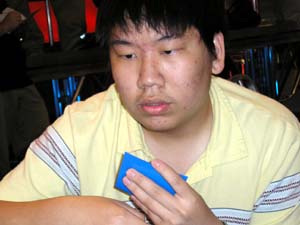 qualified for Nationals from the Southwest Regionals in New Mexico. He came into the match with four losses, and would need some crazy things to happen in order to actually make the top 8. Tony Goodson was only planning being in a single grinder on Thursday and then going home to St. Louis, since he was scheduled to work Friday, Saturday, and Sunday. However, since he currently had two losses and two draws in the main event, he was guaranteed to make the top 8 with a win.

Tony: "There's a good chance I will get fired if I make the final day. I'm a dealer at a casino, and they aren't too happy that I've already called off back to back days."

A turn 1 Goblin Sledder from Goodson was followed by a turn 1 Skullclamp from Phimus. Tony's second turn brought Sparksmith, but Phimus had a bit more pressure with a Frogmite that he promptly Clamped. Somber Hoverguard entered the game briefly before being howitzered out of the air, but Tony was stuck at two lands. Arcbound Ravager entered play, Blinkmoth Nexus was Clamped, and third Frogmite hopped into the game, threatening to overload the mana screwed Goblins player with threats.

However, between blocking, a Sparksmith activation, and an Electrostatic Bolt, Tony managed to clear Phimus's board on the next turn, but not before Phimus drew four extra cards in the process. Tony finally found a third land and cast a Goblin Warchief, but it didn't matter since he'd already taken so much damage from creatures and Sparksmith that Phimus cast a Disciple of the Vault and Shrapnel Blasted himself one step closer to the final day.

Phimus: "So (Adam) Prosak told me to put Sulfuric Vortex in my Affinity sideboard… it's not amazing, but it's solid. It won me a match today. Stop looking at me like I'm crazy."

Tony: In - 3 Naturalize, 2 Viridian Shaman, 4 Detonate Out: Weenies
Phimus: In - 4 Pyroclasm, Glimmervoid. Out - 4 Disciple of the Vault, 1 Vault of Whispers 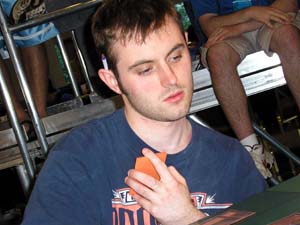 Phimus started by tossing back his seven cards for a better six, and then casting an Arcbound Worker. Goodson Detonated a Great Furnace, and then cast Goblin Warchief, but it didn't stop Phimus from playing two more Seats of the Synod, Frogmite, and Skullclamp on subsequent turns. Arcbound Ravager entered the game, along with another Clamp and another Frogmite, and the subsequent attack dropped Tony to eight. "I'm sure I'm perfectly safe," quipped Tony.

Goodson finally found a Wooded Foothills to give him access to Green mana, and opening up all the artifact destruction he had sideboarded in. Viridian Shaman killed a Skullclamp. The final turn ended when Pan attacked with two Ravagers and a pumped up Frogmite to drop Tony to one, and then topped off his victory sundae with a Shrapnel Blast kiss.